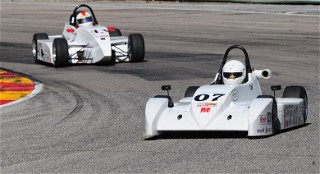 ELKHART LAKE, Wis. (June 19, 2016) – When competitors lose a race they should’ve won, it feels terrible. But racers that get a victory when things looked bleak, they’ll pump their fist in the air. And that happened a couple times during the second day of competition at the WeatherTech® Chicago Region June Sprints® SCCA U.S. Majors Tour at Road America in Elkhart Lake, Wisconsin.

Calvin Stewart, the Formula 500 Daytona SCCA Runoffs Champion and 2015 Kimberly Cup recipient, was having a tough June Sprints weekend. He was unable to start Saturday’s race, which was won by Aaron Ellis. But come Sunday, Stewart’s problems were solved and he started on pole. However, Ellis in his Ellis AE13 grabbed the lead in the first turn. At the beginning of lap three, Stewart pulled alongside Ellis to retake the top spot, and the battle raged on from that point. Starting the final lap, Ellis was up front until Stewart in his Novakar Blade F600 made a daring pass at Road Atlanta’s Turn 11, also called the “Kink.” He then held on for the win, excitedly thrusting his fist in the air while crossing the finish line.

Last-lap victory passes occurred a few times during the second day of June Sprints racing on Road America’s splendid 4-mile, 14-turn circuit. In the Spec Miata event, Saturday winner Jim Drago was in a heated battle with Daniel Bender, Craig Berry and others for most of the race. On the last lap, Drago was defending his line as Bender looked for every opportunity to pass. The tussle slowed the two drivers and, when the checker fell, it was Voytek Burdzy who managed a last-lap victory.

“I had a good car and good pace,” Burdzy said while receiving hugs from loved ones after the race. “If they didn’t fight too much, it was difficult for me to gain on them. But then they started fighting quite a bit and gave me a gift.”

More last-lap excitement happened later in the day during the Formula Mazda event. Jacob Loomis, Saturday’s winner, held the lead for most of the race with Jarret Voorhies working hard to stay in contact. Loomis had the lead as the last lap began, but as the duo crested the hill that leads to the starter’s stand, it was Voorhies pump, pump, pumping his fist in the air while crossing the finish stripe first.

“Jacob was really fast. He really made me work for this,” Voorhies said after the race. “I had a pretty bad crash Friday morning, and I’d been having car troubles since then. On the last lap I just got a really good run in the last corner, picked up his draft, and was able to win by about half a car.”

Completion of racing at the WeatherTech® Chicago Region June Sprints® wraps up Round Five and Round Six of the Northern Conference calendar and marks the midpoint of the season’s 12 rounds. Next up for the Northern Conference is the July 9-10 SCCA U.S. Majors Tour at GingerMan Raceway in South Haven, Michigan. More information about the entire SCCA U.S. Majors Tour can be found at SCCA.com/majors.