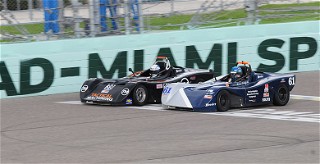 HOMESTEAD, Florida (January 9, 2016) – Close finishes, including some nearly too close to call, were the order of the day Saturday at the opening round of competition for the 2016 SCCA U.S. Majors Tour from Homestead-Miami Speedway.

Friday’s qualifying foreshadowed how close Spec Miata would be on Saturday, with Danny Steyn, of Fort Lauderdale, and Selin M. Rollan, of Miami, turning identical lap times for the provisional pole. Saturday morning’s second qualifier saw faster times, and the same two drivers up top, and Steyn earning the pole position by 0.001-second.

A shakeup at the start of the race dropped Rollan back from the lead, and fourth-starting Cory Collum, of Cape Coral, Florida, moved to second behind Steyn. The duo ran nose-to-tail for the next 14 laps, bump-drafting around the banking and remaining in a Mazda train throughout the rest of the 2.3-mile road course/oval.

On the final lap of the 25-minute timed race, Collum held back entering the back straight and got a run on Steyn as they exited the final corner. Collum dove his No. 23 Auto Galaxy/Auto Technik Mazda Miata to the left and edged Steyn to the checkered flag by 0.052-second. Rollan finished third.

The Spec Miata finish looked like a runaway compared to Spec Racer Ford 3. Polesitter and defending National Champion Kerry Jacobsen, of Deland, Florida, and Brian Schofield, of Lakeland, Florida, ran nose-to-tail the entire race, swapping the lead. As they took the white flag, Schofield was ahead by inches. As they came to the checker, it looked almost too close to call, with Jacobsen winning by mere inches. The official margin of victory for the No. 3 Comprent Motorsports entry was 0.004-second.

Not to be out-done by the spec classes, Group Three for small formula cars featured two side-by-side finishes for a class win. Overall, Chuck Moran, of Oakton, Virginia, edged a charging John McMurry, of St. Louis, Missouri, to take his Van Diemen Ford to a 0.049-second win in Formula Continental®. Likewise, Formula Vee had a three-way side-by-side finish for the win, with Donnie Isley, of Fletcher, N.C., beating Russell Fredericks, of Northport, N.Y., by 0.018-second and Laura Hayes, of Fletcher, N.C., by 0.071-second.

In all, 27 classes crowned winners on the opening day of 27 U.S. Majors Tour race weekends across the country. For full results, including starting lineups for Sunday’s second half of the weekend doubleheader, visit the event homepage at www.scca.com/homesteadmajors.