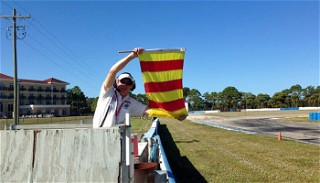 TOPEKA, Kan. (Dec. 7, 2015) – Adrian Fawdington, of England, by way of Davenport, Florida, was awarded the FIA’s Outstanding Official of the Year Award for 2015. Aside from that, he is also an SCCA member who has worked numerous races in and around the Central Florida Region.

Fawdington said he has been involved in motorsports for more than 45 years. His history with SCCA goes back to 2004 and he currently holds a national flagging and communications license. As a result, Fawdington can often be seen as a corner captain at professional and amateur racing events in the United States.

Like many involved in the sport, Fawdington was exposed to motorsports at a young age by his parents. His family would ride their bicycles to the local track – Mallory Park in Leicestershire – to see the local club racers take to the track. Even through a period when Fawdington lost his eyesight, he went to the track to hear the cars.

Spending the winter months in the warmer temperatures of Florida, Fawdington has a history of working several events at Sebring International Raceway, through SCCA. When in England, Fawdington spends his time as an event organizer and trainer for the Motor Sports Association – the governing body of motorsports in Great Britain recognized by the FIA.

When comparing the events he works in the States and those in Europe, especially the amateur ones, Fawdington said there are some noticeable differences.

“Here in the United States I work many Florida events, including the Rolex 24 at Daytona and 12 Hours of Sebring,” Fawdington said. “But, I also work out of state club events in Georgia and Alabama. What I love about the American events is the all-inclusive atmosphere and clean, respectful racing with little judicial compliance. American club-level motorsport is very much a minority category, versus in the UK it’s much more mainstream. I think NASCAR oval racing has contributed to this perception.”

Additionally, Fawdington said he enjoys working at races with SCCA and MSA, back in the United Kingdom. The differences are surprisingly small and easy to overcome.

“I love working both type of events and it’s very easy adjusting,” Fawdington said. “The flags are very similar, with local interpretations. Views on personal safety are similar, costs are helped a little here, is the US, where as in UK they are not.”

Fawdington also said he likes the red flag rules in the SCCA which bring all cars to a stop on track as soon as possible, and in a safe manner. He also pointed out the shared camaraderie and respect between competitors and workers at the corner stations. From a big-picture standpoint, Fawdington also said he applauds the amount of training and assessment that hopeful driver must go through before getting their license to race. As a result, he said the level of driver discipline and respect for the rules and regulations regarding the event is very high. In the end he said what’s left if good, clean racing.

As a long-time member of the motorsports community, Fawdington has some important views on what makes the sport so interesting. He also discusses some of the drawbacks that he’s run into over the years.

“To me motorsport is thrilling, dynamic, dangerous to a degree, exciting, demanding and ever changing,” Fawdington said. “It is a highly-charged, state-of-the-art sport full of thrills and excitement surrounded by great like-minded people.

“What I don’t like is the occasional disregard for workers/marshals demonstrated by competitors, or very serious incident to drivers.

“Without doubt in my 50 years in the sport, everything has changed for the better. Circuit design is a huge improvement as safety features are always changing for both car and driver. The end-result is a huge difference to safety and reduced injury rate.

“Training of marshals and officials has gone from zero to hero, substantially improving personal care and incident response. The sport is still demanding, highly competitive, spectacular and substantially better managed and controlled. It is in great shape, as safe as ever, but still exciting and dynamic. Bring it on and give me more.”

With his recent accolades and long history in the sport, Fawdington has no plans to slow down, or step away from the racetrack anytime soon.

“I see my time in Motor Sport staying with my till my dying day,” Fawdington said. “It’s in my blood and it’s a bug for which there is no cure, thankfully. I have so much to enjoy and a huge amount to contribute with so much knowledge. The passion only dies when you depart planet earth.”