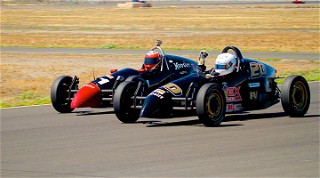 BUTTONWILLOW, Calif. (May 2, 2015) - With temperatures scorching into the mid-90s in the California desert, it felt more like the first weekend of August than the first weekend of May. But the 16 track records that fell on Saturday felt a lot like the end of the season Championship efforts.

The Western Conference Majors Tour ran 30-minute races on a recently repaved surface at Buttonwillow Raceway Park, with track records falling left and right during Round Seven of the championship season.

The day opened with a thriller in Formula Vee, as Tim Harris and Skip Streets skipped away from the field and were left to settle the race win. Both admitted to making mistakes that cancelled out at the finish, and with one corner to go, Streets moved his No. 51 Hoosier Mysterian M3/VW to the lead.

Harris fired back, though, getting a run out of the corner in his No. 20 Apex Fire Systems Mysterian M3 onto the front straight. Harris had enough to go by, moving his nose just in front for the win at the checkered flag.

Not to be outdone, the winged open wheel cars put on their own great show later in the day. In Formula Mazda, Larry Mason’s No. 12 Auto Diagnostic Services/Polar/The Fiberglass Body Formula Mazda took the lead early with Tazzio Ottis on his tail. The pair battled back and forth, with Ottis sneaking in front and catching traffic at opportune times to sneak away for the win in the No. 72 Patrick Ottis Company Formula Mazda.