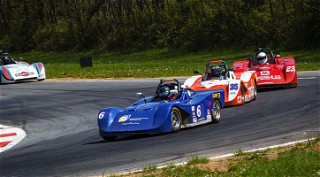 SUMMIT POINT, W. Va. (May 3, 2015) – A photo finish in Spec Miata highlighted a day of racing action on the final day of the SCCA U.S. Majors Tour at Summit Point Motorsports Park, hosted by the Washington D.C. Region.

Danny Steyn, of Fort Lauderdale, Florida, clinched the Southeast Conference Championship with his first win of the season after four previous runner-up finishes. Steyn looked to be in control of the race in his No. 39 ADEPT Studios/Rossini/OPM Motorsports/Traqmate Mazda Miata, until a resurgent Tyler Kicera battled back from an early issue in the closing laps. As the pair exited the final corner and headed to the finish, Kicera’s No. 44 Rock-It Cargo/Tait Towers/Kicera Motorsport Mazda Miata had the run and pulled alongside at the checkered flag.

The finish was so close, it necessitated a visual ruling, with the judges on the start/finish stand noting that Steyn was ahead at the stripe, although Kicera’s timing transponder hit 0.005-second before Steyn’s.

In other Championship battles, Alex Mayer, of Harleysville, Pa., earned his second-straight win of the weekend in Formula 1000 to force a tied point total with Michael Crowe. Mayer, driving the No. 77 JDR/Hoosier/Moon’s SuperCycle JDR/Suzuki, earned the season title based on his four wins to Crowe’s three.

George Winkler, of Frederick, Maryland, survived contact to drive his No. 27 Winkler Automotive Service Center Ford Mustang Boss 302 to a fourth-place finish in Touring 1, clinching the Southeast Conference Championship. Winkler also won the drawing for a free SCCA Runoffs® entry. All Conference Champions in attendance at the season finale were eligible for the prize.

With his sixth win on the season, Michael Scornavacchi, of Matthews, N.C., captured the Touring 4 Championship in his No. 25 Hoosier/Angry Sheep Motorsports/Carbotech Pontiac Solstice.

Also of note, Kevin Fandozzi, who was part of Saturday’s fantastic Touring 3 race with Rob Hines, was uninjured after a heavy impact with the barrier in his Chevrolet Cobalt SS. Fandozzi’s single-car accident forced Race Group Four to be stopped for cleanup. Hines went on to the Touring 3 win.

Finally, 15-year old Keyvan Andres Soori again lowered the overall track record at Summit Point Motorsports Park in his No. 56 K-Hill Motorsports/Hoosier Tire Swift 016a/Mazda. Andres Soori turned a 1:03.973 (112.548 mph) to set the Formula Atlantic record. Prior to the weekend, the class and overall SCCA mark was a 1:06.338.

Full results and winner’s interviews are posted at www.scca.com/summitmajors.