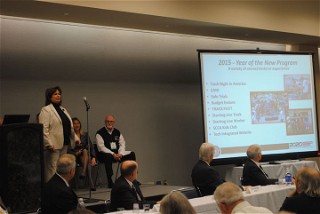 CHARLOTTE, N.C. (Feb. 20, 2015) – The Annual Meeting served as the starting gun to the 2015 Sports Car Club of America National Convention and MSX Expo, held at the Charlotte Convention Center on Friday morning. The meeting was the first of several leadership and informational sessions for SCCA members.

The over-arching theme of the Convention is 2020. Not only does the theme encompass a look forward in a five-year timeframe, but also a clear look back at where the Club has been in the past year and throughout our history. By referencing what worked in the past and what did not, the goal is to move forward with a clear vision and renewed vigor in what we can do in moving SCCA forward.

SCCA President/CEO Lisa Noble opened the meeting, welcoming members of all stripes. The mic was then handed off to Chairman of the SCCA Board of Directors John Walsh. Aside from welcoming members on behalf of the Board, Walsh also spoke to many of the personnel changes within the organization. That included the induction of two new board members, Area Three Director Lee Hill and Area 11 Director KJ Christopher.

Noble then took over the stage to outline the direction of the Club moving toward the future. One highlight put forth by Noble was the creation of new programs to further enhance the Club membership experience. New programs like Track Night in America, the Classic American Muscle Challenge, Solo Trials, Track Fest, Starting Line program enhancements and the ongoing push for an SCCA Kids Club were some of the notable programs that were introduced.

Robert Clarke, SCCA Pro Racing President, stepped into the spotlight to review past events put on by the organization and what to look to for the upcoming race season. Clarke touted the increased participation in the flagship programs of SCCA Pro Racing, including Pirelli World Challenge, Trans Am and the Battery Tender Mazda MX-5 Cup Presented by BFGoodrich. Servicing the FIA Formula E international racing series and Formula Lites series, here in the States, are the largest two new lines of business for Pro Racing. Clarke closed his remarks by sharing his reflections of what Pro has meant to the Club, emphasizing the importance of the independently-owned subsidiary moving forward.

Eric Skirmants, the Principal of SCCA Enterprises, stepped up to the podium to review 2014 an look toward 2015 plans. The Spec Racer Ford Gen3 rollout was a focal point for Skirmants. He made a point to speak to the importance of moving their suite of products forward.

“At the core, participation is our biggest focus,” Skirmants said. “When we get more racers to buy our products that creates more customers for the Club in the form of race entries. The importance of the synergy between our organizations is paramount.”

Mindi Pfannenstiel, SCCA Senior Director, Finance and Human Resources, broke down the financial performance of the Club. That included a net income just under $56,000, and the assurance that the organization is on the correct financial pathway moving toward the future.

Raleigh Boreen, Chairman of the SCCA Foundation, wrapped up the program-based portion of the meeting with a review the Club’s philanthropic arm. The Foundation is charged with running the Tire Rack Street Survival and Formula SAE programs, as well as proper preservation of the Club’s archives. The biggest project facing the Foundation in the next year is the relocation of the archives from their current facility in Indiana to the International Motor Racing Research Center in Watkins Glen, New York.

Walsh closed the annual proceedings and called for an adjournment to the meeting.

Additional information on the Convention and MSX Expo, including schedules, session descriptions and registration information, can be found here.