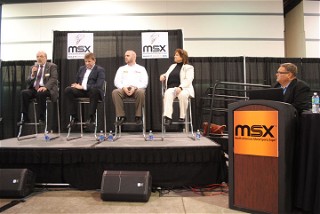 CHARLOTTE, N.C. (Feb. 20, 2015) – The SCCA 2020 panel discussion featuring SCCA Club and partner executives deliberating the future of the motorsports industry and the Club’s role within it capped off the first day of the 2015 Sports Car Club of America National Convention and MSX Expo on Friday, held at the Charlotte Convention Center Feb. 20-21.

Lisa Noble (CEO/President), Eric Prill (COO), Robert Clarke (SCCA Pro Racing President and SCCA VP of Business Development) and Tire Rack Vice President Matt Edmonds held a conversation to tackle some of those issues. Moderated by long-time Club member and professional motorsports broadcaster Greg Creamer, the talk took on many of the toughest questions facing those in the motorsports industry. Much of the early discussion was centered on how to get younger generations involved in motorsports.

To that end, Noble made her opening comments with an eye on getting the general public interested in their vehicles once again. She made the point that the Club was not created solely for the sake of competition, but to promote a community of auto enthusiasts.

“Our broader goal should be to attract those who do not yet know they are interested in cars,” Noble said. “The number of car owners out there is huge, but many of those people would not consider themselves car people. Often times they do not realize it, but there is an emotional connection forged with their vehicle. The key should be to emphasize that connection.”

Creamer’s initial question was on the overall health and interest in motorsports in today’s world. This served as the stepping-off point for the discussion.

“What we have is a basic erosion of interest in motorsports, and sporting events in general,” Clarke said. “What we have to do is understand how to engage the younger generations in what we are about, which is cars. There are so many different things for our younger generations with which they get involved. It’s hard to compete amongst all the background noise.”

Clarke went on to explain that neither the vehicles nor the format featured in motorsports competition catch the eyes of younger generations. The challenge not only lies in finding exactly what attracts those younger viewers, but then understanding how to engage those points.

As the conversation continued, the focused narrowed on SCCA’s role in this over-arching process. Each panelist agreed that SCCA is in a prime position to lead the effort to push motorsports, and the automobile, back into the public’s general consciousness.

“The Club is at an interesting point in time,” Prill said. “There are many of us that have been members for years, but there are also many other folks out there who would like to get involved in a more personal way. Our goal should be to bring down those barriers to make our organization more accessible.”

One of the remaining challenges discussed was how to make non-members aware of what SCCA has to offer, even if not strapped into a racecar. The recognition and gratitude surrounding the sheer number of volunteer hours needed to put on a successful event was one echoed all four panelists.

“I want to look at the participation in our Club from a personal aspect,” Edmonds said. “As a major part of the Tire Rack Street Survival program, we have people in our organization interested in getting more involved all the time. We need to get as many people out to an event as we can. It’s not just about competing. There are some many different aspects in which to get people involved.”

The conversation ended with a soft reveal of the Track Night in America driven by Tire Rack.com concept, promising a formal announcement in the coming days.

Heyward Wagner, Director of SCCA Experiential Programs, introduced the program that promises evening lapping sessions at a reasonable price, at tracks across the country. Further details outlining the program will be made available in the coming days.

Day Two of the SCCA Convention is slated to begin Saturday, at 8:30 a.m., with the MSX Expo floor set to re-open at 10:00 a.m. The entire event will conclude with the SCCA Hall of Fame and Awards Banquet Presented by Mazda, scheduled for Saturday at 6:30 p.m.

Additional information on the Convention and MSX Expo, including schedules, session descriptions and registration information, can be found at www.msxexpo.com.