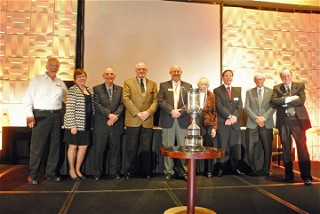 CHARLOTTE, N.C. (Feb. 21, 2015) – The Sports Car Club of America Awards and Hall of Fame Induction Presented by Mazda closed out the 2015 SCCA National Convention and MSX Expo held at the Charlotte Convention Center Feb. 20-21. The banquet saw the presentation of four of the Club’s highest awards, in addition to the induction of the 2015 Hall of Fame class.

To start off the awards, the Member of Excellence was given to JD King. King was selected by the Board of Directors for his extensive contributions to the Club. He is most known in the Solo community, but he has plenty of experience in wheel-to-wheel racing. In 1997, King was involved in an industrial accident that caused him the loss of his left arm. However, that did not deter King from following his passion for the Club and is even an active competitor and Club Racing administrator to this day.

Andrew Pallotta took home the Solo Driver of the Year award following a performance in which he captured the National Solo Championship in Super Touring Xtreme, beating a field of over 60 drivers by more than 0.5-second. Pallotta was selected by the members of the Solo Events Board for his noteworthy performance at the Championship meet.

“I am so surprised by this that I don’t know what to say,” Pallotta said. “Nick [Barbato] and Darren [Seltzer] are amazing drivers, in their own right. I can’t believe that I was chosen for this award over them. I have to thank everyone who has helped me along the way. There are too many to name, but without you this wouldn’t have been possible.”

Next up on the docket was the President’s Cup, which was given to Andrew Longe. Longe was announced as the award winner by three-time President’s Cup winner and motorsports legend Roger Penske in a video recorded message. This award is presented to the driver who showed the most ability, competitiveness and success at the National Championship Runoffs as selected by the Stewards of the Meet and the Chief Steward of the event. Longe’s 20-lap battle with Kyle Kelley for the Touring 2 title more than qualified as the finish was decided by just 0.047-second, the second-closest Runoffs finish of the transponder era.

The final award of the night was the Woolf Barnato award, presented by last year’s winner Bob Dowie. Current SCCA VP of Solo/Rally Howard Duncan was revealed as the winner, as selected by the previous three winners for his outstanding long-term contribution to the Club. A pleasantly surprised Duncan accepted the award.

“I can’t believe I am up here receiving this award,” Duncan said. “I figured I was going to be able to take it easy tonight since I knew I didn’t have to worry about speaking. I was just planning on standing up here to direct traffic. However, this is a huge honor and I thank everyone here for this opportunity.”

To finish the evening’s festivities was the induction of the newest class to the SCCA Hall of Fame. Each new member was nominated by the general membership and hand-picked by the selection committee based on both on- and off-track contributions to the Club. Included in the class were Dr. George Snively, Ron Sharp, Bob Tullius, Roger Johnson and Oscar Koveleski.

Accepting on behalf of Snively was Dr. Dan Thomas, the President of the Snell Memorial Foundation. Snively’s research into head trauma was sparked by the death of William “Pete” Snell at an auto race in 1956. It was determined that Snell died because of inadequate head protection. Snively decided to further research the problem and presented his findings to the San Francisco Region SCCA. As his research gathered momentum, it eventually led to the founding of what we now know as the Snell Foundation. The organization is responsible for certifying helmets for many applications and pushes to increase the effectiveness of those safety devices.

Ron Sharp was the next inductee. He made a name for himself more as an event organizer, but also spent plenty of time at the controls of a racecar. Among his accomplishments were the successful move of the Runoffs from Road Atlanta to Mid-Ohio and the successful production of the Des Moines Grand Prix.

“When the Des Moines Valley Region found out, in 1988, that Trans Am was planning on having a street race, our region looked at is as a real opportunity,” Sharp said. “Not many regions get the opportunity to participate in something like this. As a show of support, our membership exploded from about 130 to over 400. We were able to work with many of the chiefs from the Central and Mid-West Divisions to make the event a success. We all knew that street races have their own personality, and set of problems, but with hard work from the team we were able to make the event happen.”

Bob Tullius etched his name into SCCA history with many successful years behind the wheel of various cars. His Group 44 race team became one of the most fearsome organizations in SCCA Club Racing, at a time when there were not many full-fledged amateur race teams. Tullius also proved to have success in the professional ranks scoring numerous Trans Am and other professional wins.

“I thought sitting on the grid for at the Runoffs was nerve-wracking, but not to worry this is much worse,” Tullius said. “My friends and supporters, many of whom are here tonight, are extremely important to not only my racing success, but my life in general. The life of a racer is a mixture of high highs and very low lows. Without good support, it makes dealing with those cycles very difficult.”

Roger Johnson was the penultimate inductee during the evening. Johnson made his mark in the Solo community, most prominently as a course designer. While that is part of his legacy, Johnson also produced the materials by which new course designers learn the craft. Aside from that, Johnson has also introduced an international flair to the SCCA Solo program. For the past two seasons, in connection with former F1 and IndyCar driver Eliseo Salazar, Johnson has brought a contingent of Chilean drivers to Lincoln, Nebraska, to compete at the Tire Rack SCCA Solo National Championships.

Closing out the ceremony was the formal induction of Oscar Koveleski to the SCCA Hall of Fame. Koveleski joined the club in 1950, scoring his first win a year later. He went on to race in the Can-Am series and also took part in the 24 Hours of Daytona and 12 Hours of Sebring. He also has an A Sports Racing National Championship title to his credit.