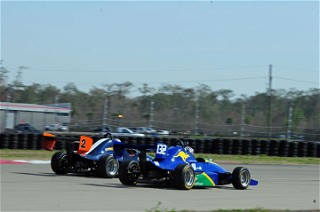 AVONDALE, La. (March 8, 2015) – The SCCA U.S. Majors Tour at NOLA Motorsports Park is officially a wrap, following the second day of competition. The race weekend served as Rounds Five and Six of the Southeastern Conference campaign, and was the opening weekend for the Mid-States Conference.

Seven race groups took to the 2.75-mile, 16-turn circuit just south of New Orleans for the second annual Majors race weekend in as many years. Once again, the Majors lived up to its billing by bringing the country’s best amateur racecar driver to the best race tracks in America. NOLA Motorsports Park is slated to host its first professional auto race later this year, and has already hosted professional motorcycle racing.

Here is a summary of the day’s action:

Run Group One: Mike Lewis, of Poway, California, completed the weekend sweep in GT-1. At the wheel of his No. 12 Goodyear/Cyclo/Redline Oil Jaguar XKR, Lewis kept himself within striking distance of race leader Simon Gregg during the first half of the race. Just past the halfway point, Lewis forced the issue with Gregg and was able to make the overtaking maneuver stick. From there, Lewis weaved his way through traffic and held on to take the win as the checkered flag was displayed one lap early for a stalled car in Turn 13.

Run Group Two: Spec Miata was again decided during the last lap. Andrew Carbonell, of Miami, Florida, emerged as the winner over his teammate Todd Buras. As the field exited Turn 17 to take the white flag, Buras got a huge run on Carbonell and won the drag race to the strip. However, Buras was unable to hold the position.

Going through Turn Two, Carbonell was able to get back around Buras. Carbonell then was able to complete the lap error free, at the controls of his No. 074 BSI Racing Mazda Miata. A perfect last half was all Carbonell needed to do to seal his victory.

Run Group Three: Joseph Burton Harris, of Cresson, Texas, went 2-0 at NOLA Motorsports Park, after beating a field of seven other Formula Mazdas on Sunday. Harris went toe-to-toe with multi-time National Champion Darryl Wills and came out on top as a result of patience.

As the laps wound down in the 17-lap race, Harris got a good run off Turn 17. He and Wills were side-by-side as they approached Turn One. Harris had the inside line for the corner but Wills made his car stick on the outside line. It wasn’t until the leaders got to Turn Four that Harris was able to finish his pass.

Run Group Four: Steven Coates, of Stanford, North Carolina, took the lead on the last lap and was able to hold it together to clinch the win in Spec Racer Ford. As the field received the white flag, Coates trailed Grayson Strathman on the last lap but saw traffic ahead on the approach to Turn One. In his No. 93 Driving Solutions SRF, Coates made his move going into Turn One and had completed his move by Turn Two. Strathman was able to follow Coates by the slower traffic, but Coates completed the lap without a mistake.

Brian Schofield, of Lakeland, Fla., completed the sweep with a Sunday win in his No. 61 PM Racing SRFG3. He finished the race by more than one second over Tray Ayres.

Run Group Five: Steven Davis, of Danielsville, Ga., was the winner in Formula Vee, at the wheel of his No. 80 Hoosier/Butler Engines/Roxannes Headers Racer’s Wedge SB-1. On the penultimate lap, Davis sat in fifth and saw his opportunity to strike. On the front straight he popped out of line and was surprised to see fellow FV racer Laura Hayes do the same. He used her draft to work his way to the inside lane. As the group approached Turn One, Hayes backed off allowing Davis to slot into second. On the final lap, Davis used lapped traffic to get into the lead around Charles Hearn.

Lewis completed his four-race sweep after notching the Sunday Formula F win in the No. 12 Redline Oil/Cyclo Vestal 09F. Also recording a perfect weekend was Jack Walbran, of St. Louis, Missouri, while driving his No. 67 Mitchel Racing Services Scorpion.

Run Group Six: Matt Reynolds, of Fair Oaks, Texas, put on a dominating performance at the wheel of his No. 71 Reynolds Bros. Racing/JPM Mazda Miata. His Sunday win allowed him to complete the weekend sweep as he crossed the finish line more than 25 seconds ahead of class rival Andrew Robertson.

Run Group Seven: John Phillips, of Sealy, Texas, took home the win in a close-fought B-Spec battle with JF McClughan. Phillips, in the No. 43 Phillips Race Prep/TRD/CARS Toyota Yaris, grabbed the lead and was able to hold that position as McClughan was constantly hounding him.

The next event for the U.S. Majors Tour Southeastern Conference will take place at Road Atlanta, March 20-22. The Western Conference will also be in action that same weekend at Chuckwalla Valley Raceway, March 21-22. For additional information on the NOLA Majors, including full results, visit SCCA.com/NOLAMajors.