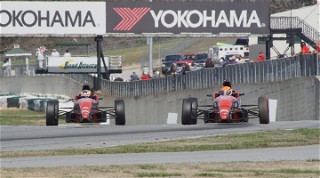 BRASELTON, Ga. (March 20, 2015) – With Spring in the March air, the Southeast Conference of the SCCA U.S. Majors Tour slid past the halfway point on Saturday at Road Atlanta, running 25-minute timed races for Round 7 of 12 in the championship season.

Sunshine and warm temperatures had everyone trying to put a best foot forward, with the weatherman calling for the dreaded rain during Sunday’s races.

Eight groups raced around the 2.54-mile circuit, with 20-lap races schedule for Sunday.

Group 1: The day opened with the small formula cars, who led with their customarily big competition.

Teammates Thomas McGregor (No. 90 Exclusive Autosport Spectrum 014/Honda) and Scott Andrews (No. 93 Exclusive Autosport Spectrum 014/Honda) swapped the lead in Formula F, dueling for fast laps and using the draft to catapult forward. McGregor pulled in front going into the final lap as they had caught lapped traffic, and Andrews had one last shot coming down the hill to the checkered flag to steal the win. Andrews ran wide in the final corner trying to carry as much speed as possible, but McGregor held on by a half car length and a 0.056-second margin of victory.

Stevan Davis set a new Formula Vee track record and held the lead in the No. 80 Hoosier/Butler Engines/Roxanne Headers Racer’s Wedge at the white flag. Hoping to have enough to hold on with the chance to be a sitting duck anyway in the draft, Davis had his momentum balked just enough by a slower car. That opened the door for a hard-charging Donnie Isley in the No. 30 Digital Intelligence Agitator, who swept through and into the lead for the win.

Group 2: Dillon Machavern (No. 24 Heritage Mazda Miata) held his position in the lead pack as he, Jonathan Goring (No. 18 Jonathan Goring Motorsports Miata) and Danny Steyn (No. 39 ADEPT Studios/Rossini/OPM/Traqmate Miata) broke away from the field in Spec Miata.

Machavern rode in second for the majority of the race, then moved to the front with one to go. Ready to race, Machavern held on out front for the final lap, with Steyn a half-second behind at the stripe.

Group 3: The Formula 1000 group ran alone, with a standing start, to kick off the afternoon races. The race for the lead came down to the last lap, with Jeremy Hill’s No. 00 Hoosier Tire Photon VD07 leading Alex Mayer (No. 77 JDR Racecars/Hoosier Tire JDR) and defending National Champion JR Osborne’s No. 83 RFR Racecars Firman F1000).

Under braking for Turn 10 at the end of the backstraight, both Mayer and Osborne saw an opportunity to make a move. Osborne shot up the inside from third, with Mayer in the middle and Hill on the outside. Mayer and Osborne touched, slowing Mayer to a crawl and spinning Osborne over in front of Hill, who came to a stop himself on track to avoid the contact.

Mayer got his momentum back first, and crossed the stripe just in front of a charging Hill. Osborne stalled on course, finishing seventh.

Group 4: Despite a wild double spin coming through the fast Turn 12 after another car had dropped oil on the track, Bob Schader took the overall and Touring 3 win on Saturday in the No. 8 Hoosier Tire Nissan 350Z. After the spin, Jeffrey Cripe’s E Production No. 96 German Cars BMW 328is briefly moved into the overall lead, and the two battled. Schader moved back to the front, but each took their class win.

Ken Kannard’s No. 39 Northwest Cable Mazda Miata took the win in F Production, with Will Perry garnering the top spot in H Production behind the wheel of the No. 36 Rivergate Honda CRX. Michael Scornavacchi claimed Touring 4 in the No. 22 BFGoodrich Tires Ford Mustang.

Group 5: Spec Racer Ford is a class that celebrates the draft at Road Atlanta – except today for Tray Ayres. Ayres, with the help of a spin from a car chasing him, pulled just enough of a gap in the Gen 3 Spec Racer Ford class to walk away from the field in the No. 7 Ayres Racing Spec Racer Ford, opening up a nearly three second gap that was wide enough to earn the win without a last-lap challenge.

Scott Rettich, in Spec Racer Ford, kept his No. 17 Alliance Autosport Spec Racer Ford glued to the back of Denny Stripling’s No. 91 Spec Racer Ford for most of the race, then took advantage of the aero dynamics to move around and take the checkered flag.

Group 6: The on-track rivalry in GT-1 between Doug Peterson’s No. 87 3Dimensional.com and Simon Gregg’s No. 59 Derhaag Motorsports Chevrolet Corvette continued on Saturday following a pile up at the green flag in the middle of the field that involved at least four of the big bore machines. Though only one car was unable to restart following a black flag, it left just an eight minute dash for the race win.

Peterson followed Gregg for the first six minutes, until Gregg found traffic in the large group at the wrong time. Peterson was able to get by, and then opened up a lead of more than two seconds in the final two laps for the top step on the podium.

Pete Peterson (no relation) took GT-2 and third overall in the No. 98 Toyota Celica, with Dainton Brooks’ No. 31 Georgia Controls Ford Mustang on top of American Sedan. Tim Myers’ No. 22 BFGoodrich Tires Dodge Viper was the Touring 1 winner in the group.

Group 7: While Elivan Goulart was walking away with the overall and Super Touring Under win in the No. 72 Krugspeed Lotus Exige, the Touring 2 battle was cat and mouse behind him. Cameron Maugeri’s No. 57 BTI Ford Mustang faced pressure from the No. 44 Calypso Lemonade/Fall Line Motorsports Porsche GT3, but Maugeri held on to the top spot by less than a length and a half at the finish. Nick Leverone won Super Touring Lite in the No. 31 Flatout Motorsports Mazda Miata.

Though not the fastest cars on track, the B-Spec class was once again a back and forth battle between the No. 0 BFGoodrich Tires/HPD Honda Fit of Chi Ho and the No. 64 BFGoodrich Tires Honda Fit of Darren Seltzer. Ho held off the SCCA Solo National Champion for the win by a small car length.

In Formula Mazda, Joseph Harris (No. 132 Formula Mazda) battled with Darryl Wills (No. 2 Hillenburg Motorsports Formula Mazda) until lap 15, when a car from a different class cut tried to sweep around the pair through a corner. Wills jumped on the brakes to avoid contact, but moved caused him to spin and Harris was left alone for the win.

The Majors from Road Atlanta continues on Sunday with 20 lap races, beginning at 8:15 a.m. Live timing, notes, the PA audio feed and static cameras placed around the track are available at SCCA.com/SCCALive.

More information on the event can be found at SCCA.com/AtlantaMajors.