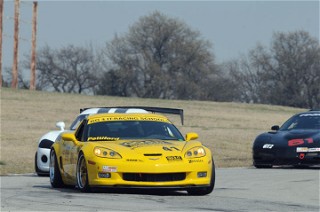 For racers in both conferences, the racing season is still young. Each point earned can be the difference between a Majors glory and coming in second in Championship points. The Mid-States Conference will be contending Rounds Three and Four, while the Western Conference will reach the halfway point of the season after the conclusion on Sunday’s racing.

If you’re planning to follow along and home, and why wouldn’t you, here are some things to keep an eye on:

Storylines/Things to Watch For Major League: In September 2012, the Sports Car Club of America rolled out the U.S. Majors Tour as the top level of amateur racing in this country. The Majors Tour replaces what was previously called “National” SCCA racing, split into a season-long championship in five geographic Conferences. Both Hallett and Thunderhill have played host to several SCCA Club Racing events over the years. For many amateur racecar drivers in these regions of the country, both of these venues are near the top of their list of favorite tracks. SCCA Club Racers – The Best in the Country: There are many amateur road racing groups in the United States, but the clear leader of top drivers is with the SCCA. Though most are weekend warriors who take vacations from their full-time jobs to attend races, it’s a craft taken seriously. Bobby Rahal, Mark Donohue, Roger Penske, Michael Andretti, and actor/driver Paul Newman got their start in SCCA Club Racing. More recently, you could have seen current stars Boris Said, Graham Rahal, Sam Hornish or J.R. Hildebrand at an SCCA Club Racing event.

Booming Big-Bores: The Big-Bore group at Hallett, which includes GT-1, GT-2, GT-3, American Sedan and Touring 1, will feature a whopping 23 cars. That will be the largest group of cars on track throughout the entire weekend. As it is still early in the season, the fight for Conference titles is still wide open. That should prove for some interesting on-track action in all classes.

Spec Racer Ford Spectacular: The SRF community is poised to turn out in droves at Thunderhill, as a total of 27 Spec Racer Fords and Spec Racer Ford Gen3s are on the entry list. In the Gen3 class, there is a great mixture of brand new Gen3 chassis and cars that have undergone the conversion to the newest specification. This should prove to be a good case study regarding the success of the conversion package offered by SCCA Enterprises.

Wing n’ Things Out West: The big-bore formula and prototype classes have also seen higher-than-average entry numbers. Expect to see lots of passing and battling everywhere you look in this high-speed, flashy race group. This is your chance to see the largest number of these sleek, purpose-built racers outside of a professional racing event.

Additional information on the Hallett Majors, including a schedule, entry list and a link to live timing, can be found at SCCA.com/HallettMajors. If you are interested in the Western Conference event at Thunderhill Raceway Park, including entry lists, schedules and live timing links, visit SCCA.com/ThunderhillMajors.