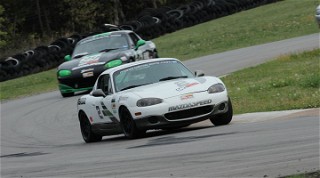 JENNINGS, Okla. (April 12, 2015) – Following Saturday’s wet races, the extra heat felt on Sunday at Hallett Motor Racing Circuit near Tulsa, Oklahoma, was a welcome respite for SCCA Mid-States Majors racers on Sunday for Round Four on the Championship.

Each of the seven group races were 25 laps around the club racing circuit, a favorite of many in the Mid-West.

The win comes just a week after crew member and Berry’s father, Jim Berry, passed away, and Drago said on the podium that he was certain he was enjoying this race.

B-Spec came down to the final lap in the dual between Joe McClughan and Saturday winner John Phillips. McClughan held the lead on the final lap in his No. 3 Hoosier/MAZDASPEED Mazda2, but Phillips saw an opening and went for the win in his No. 43 Phillips Race Parts Toyota Yaris. The two made contact side by side, and Phillips got the worst of it, spinning and allowing McClughan to take the win.

The Mid-States Conference returns to action May 22-24 at Texas World Speedway for a doubleheader and Rounds Five and Six on the season. Each of the race winners: