Day One of Season-Opening Majors Weekend in the Books 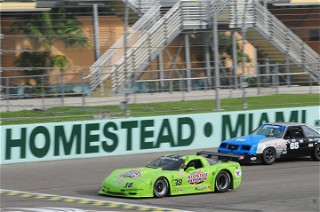 HOMESTEAD, Fla. (January 9, 2015) – The first of three days of competition at the SCCA’s U.S. Majors Tour ended after each of the seven run groups logged two qualifying sessions under clear weather conditions at Homestead-Miami Speedway. While this is the first Majors event held at the venue, it is also the first of a two-leg Florida tour that opens the 2015 Majors season.

Florida lived up to its nickname of the Sunshine State by Friday afternoon, but offered dry conditions for qualifying all day. Under mostly cloudy skies in the morning, temperatures stayed just below 70 degrees resulting in slightly more horsepower and faster times across almost all classes. After the lunch break, the sun broke through the clouds, resulting in a slicker track and slower lap times in general.

With two 20-minute qualifying sessions in the books for each run group, a morning warmup and two races are all that remain of the race weekend. The best lap time set by each driver during the two Friday sessions will set the grid for Saturday’s Sprint race. Four 15-minute warmup sessions are scheduled to start the day at 8:00 a.m. (EST), followed by seven 30-minute timed races starting at 10:00 a.m. (EST).

On Sunday, seven feature races lasting 20 laps or 40 minutes, whichever comes first, will start at 8:30 a.m. (EST). The grid for this race will be based on the best lap from each driver during the preceding qualifying and race sessions.

A worker and competitor party is slated for Saturday evening, at 5:00 p.m., after all on-track action.