Southeastern and Western Conference Majors Tours in Action this Weekend 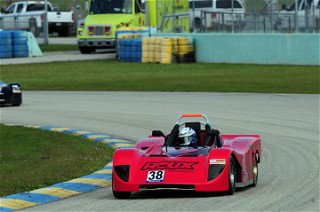 The SCCA U.S. Majors Tour will be in action on both coasts this weekend as the Southeastern Conference gets set to settle rounds three and four at Sebring International Raceway and the Western Confernce gets 2015 started at Auto Club Speedway. In both cases, qualifying of seven race groups will set the grid for Saturday's sprint race. On Sunday, each class gets turned loose for thier feature race.

For those not fortunate enough to be at either venue, all the action can be followed online via live timing on the Race Monitor app with notes being posted on Twitter @SCCALive. Combined notes and timing can be found at SCCA.com/SCCALive. In addition, streaming of the PA can be heard there.

Find additional information for the Sebring Majors here, while the event page for the Auto Club Majors can be found here.

Back-to-Back in the Sunshine State: For the second consecutive year, Florida plays host to the two opening acts of U.S. Majors Tour action. The two-stop state tour began at the Homestead-Miami Speedway and will close at the historic Sebring International Raceway. Say goodbye to Old Man Winter and welcome in the racing season with temps in the mid-70s.

So-Cal Celebration of Speed: Auto Club Speedway, located less than 60 miles from Downtown Los Angles, will host the opening weekend of Western Conference Majors competition for the third consecutive year. The high banks that make up Turns One and Two coupled with the tight and technical infield means there’s a little something for everyone. Not only that, but temperatures are forecasted to in the mid-70s under sunny skies.

A New Generation: This coming weekend, a total of 38 Spec Racer Ford Gen3s will be taking to the track in their inaugural season of Runoffs eligibility. At Homestead, drivers raved about the increased power and handling characteristics of the new car. This is the first chance drivers on the West Coast will have to shake their new machines down, in Majors competition.

Spec Miata Madness: Between the two events on opposite coasts, a total of 88 Spec Miata drivers have pre-registered to race this weekend. The massive fields and top talent in the class should provide some excellent on-track action, in both cases.