Saturdayâs Majors Competition from Sebring Ends on a High Note 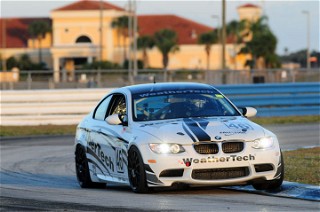 Here’s what happened at Sebring:

Run Group One: Group One featured the small-bore formula and prototype cars. Laura Hayes, of Fletcher, N.C., took the Formula Vee win in her No. 22 Digital Intelligence Protoform P2. For much of the 30-minute race, she was involved in a close-quarters battle with Charles Hearn for the class lead. The two drivers traded positions back and forth, even going through the sweeping and bumpy Turn 17 side-by-side. However it was Hayes who was in the right place at the right time as a full-course-yellow brought the race to a close behind the pace car.

Richard Coburn, of Northbrook, Ill., took the win in Prototype 2 after being involved in a tight battle with Sherman Chao. Driving his No. 3 Nostendos, Coburn said he traded positions with Chao several times in the most epic on-track battle in which he had been involved. Unfortunately for Chao, loose bodywork began to cause havoc with the handling of his machine. Chao pulled his car off course while Coburn took the win under the yellow flag.

Run Group Two: Following a lengthy red-flag session to repair a barrier as a result of an opening-lap collision between the cars of Travis Washay and Albert Sauerland, Jr., GT-Lite produced the some of the closest running during Saturday’s second race. Peter Shadowen, of Loxahatchee, Fla., would end up the victor in a back-and-forth race between himself, in the No. 72 Road n’ Race/Hoosier Honda CRX Si , and Charles Leonard.

Throughout the 11 laps run under green-flag conditions, Shadowen and Leonard were separated by as little as 0.1-second at the line. However, the race ended with the field circulating the course behind the pace car after a late-race accident in Turn 17. As scoring reverted to the last completed lap, Shadowen crossed the line first and took home the win.

Like the previous two races of the day, the checkered flag flew as the field followed the pace car as a result of a late-race crash. However, close racing was the name of the game under the race conditions. Driving his No. 38 Zulu Properties LLC Spec Racer Ford Gen3, Jacobsen said he was involved in some very close racing at the front of the field, including some contact which knocked his left rear wheel out of alignment. However, he was able to hold on to take his third win of the young season.

Run Group Four: Dillon Machavern, of Charlotte, Vt., was the first driver of Saturday’s event to take a win under full race conditions. Driving his No. 24 Heritage Motorsports/Panic Motorsports Mazda Miata, he completed 12 laps en route to his win in Spec Miata.

Second-place finisher Danny Steyn said Machavern drove a nearly flawless race, from beginning to end. Machavern’s only misstep came during the last lap when he put four wheels off track in Turn Five on the last lap. Steyn tried to take advantage of the error, but Machavern was able to recover quickly and seal his first-place finish.

Run Group Five: Connor Kearby, of Corpus Christi, Texas, captured his third Southeastern Conference Formula Atlantic win, just 1.308 seconds ahead of Garth Rickards. In his No. 56 GK Motorsports/K-Hill Motorsports Swift 016, Kearby was in second for most of the race until he inherited the lead from Keith Grant one lap shy of the finish. Carson Weeder, of Winter Haven, Fla., racked up his second consecutive win at the controls of his No. 28 Weeder Motorsports Formula Mazda. After winning the feature race at Homestead-Miami Speedway, Weeder is now the class leader in the Southeastern Conference standings.

Following a good start where Peterson and Gregg went through Turn one side-by-side, Peterson put in clean laps to pull out a small lead over the rest of the field. After a late-race full-course yellow bunched up the field, Peterson was able to pull off a good restart that allowed him to take the checkered flag more than one second ahead of Gregg.

Run Group Seven: Cooper MacNeil, of Boulder, Colo., took the Touring 2 win in decisive fashion. At the controls of his No. 46 Weathertech.com BMW M3, MacNeil built a 27-second gap to his nearest competition in the span of 13 laps.

Mark Forbes, of Miami, Fla., used lapped traffic to his advantage to take the Super Touring Under win at Sebring. In his No. 173 Active Autowerke/B&D BMW 325, Forbes was under attack from Ronald Pawley in the closing laps. Knowing Pawley’s machine could out-brake him, Forbes did what he could to stay ahead of Pawley and used his knowledge of the track, in conjunction with the lapped cars, to stay in front.

Round Four of the Southeastern Conference Majors from Sebring International Raceway is set to start Sunday morning at 8:30 a.m. (EST). Seven race groups will take to the historic road course to complete their feature race which will last 20 laps or 40 minutes, whichever comes first.

Additional information on the SCCA U.S. Majors Tour from Sebring International Raceway, including schedules, entry lists, live timing, PA streaming and streaming video, can be found at SCCA.com/SebringMajors. Timing can also be viewed on the Race Monitor app, for mobile devices.