Sebring Majors is Now in the History Books 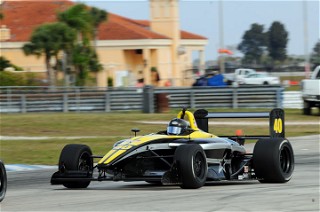 SEBRING, Fla. (January 18, 2015) – Round Four of the SCCA U.S. Majors Tour Southeastern Conference campaign, part of the SafeRacer Club Racing Program, wrapped up from Sebring International Raceway. In addition, this race weekend concludes the two-race tour of Florida for the Majors program.

Seven race groups, comprised of 28 Runoffs-eligible classes, completed their feature races. All but one race, group three, ran the full 15-lap race distance. In addition, the number of races ending under a full-course yellow was greatly reduced.

Here’s what happened at Sebring:

Run Group One: In Formula F, David Livingston, of Lexington, Tenn., was in the right place at the right time to take Sunday’s feature race win. In his No. 85 Thermamasters Spectrum 14H, Livingston was in third behind John Robinson and Thomas MacGregor. As the checkered flag was being displayed, Robinson and MacGregor got tangled up in Turn 17 and were unable to finish the race, allowing Livingston to inherit the lead.

Run Group Two: The small-bore production cars received the initial green flag, but were soon put under a full-course yellow as Austin Britton’s Lotus Super Seven spun and ended up against the left side wall, facing backwards, just past start/finish. After removing the damaged car, and fixing the wall on the front straight that was dislodged, the field was re-gridded based on the original starting positions and turned loose for their feature race.

The race, scheduled for 15 laps, ran up against the 40-minute time limit after a multi-car collision caused a complete track blockage in Turn 17. The white flag had already come out, but race officials decided to display the red flag that stopped the race. After the accident scene had been assessed, and it was determined the time limit would expire before cleanup could be completed, the race was called. Finishing positions were based on the most recently completed lap, which was 13. While the positions rolled back to the final completed circuit, that didn’t affect the top position in each class.

Run Group Four: Dillon Machavern, of Charlotte, Vt., took home his second checkered flag of the weekend in his No. 24 Heritage Motorsports/Panic Motorsports Mazda Miata. This time, his margin of victory over was much slimmer as Andrew Carbonell fell just short of winning the drag race from Turn 17 to the finish line.

Machavern spent the entire 15-lap race in a heated battle for the lead with Carbonell, Danny Steyn and Todd Buras. At the beginning of lap 14 Machavern was in second, just behind Carbonell. Machavern was able to make a move for the lead stick, taking over the lead and receiving the white flag. Machavern then held off an equally fast Carbonell for the win.

Run Group Five: Keith Grant, of Germantown, Tenn., scored his first Majors win of the season in a captivating last-lap fight with Conner Kearby. At the controls of his No. 40 Mazda/Hoosier/Polestar Swift 016 Formula Atlantic, Grant trailed Kearby to the white flag. At the approach to Turn 13, Grant made his move and went through four turns, side-by-side with Kearby. Only after Turn 16 did Grant finalize his pass, giving him a clear path to the checkered flag. Carson Weeder, of Winter Haven, Fla., completed the weekend sweep behind the wheel of his No. 28 Weeder Motorsports Formula Mazda. Doug Peterson challenged Weeder for much of the race, even holding the lead for a couple laps. But, Weeder would not be denied the opportunity to keep his three-race win streak alive. Jason Bell (Formula 1000, No. 2 Gridsport/HIS/Corby Concepts Citation FB), of Tampa, Fla., also sealed his second win of the weekend.

Run Group Six: Simon Gregg, of Ponte Vedra Beach, Fla., cruised to an overall victory in his No. 59 Derhaag Motorsports Chevrolet Corvette ahead of Doug Peterson. However, early in the race it was Gregg that was chasing Peterson for the lead. Midway through the 15-lap race, Peterson and Gregg found themselves in lapped traffic. Gregg was able to find the quicker path through, which allowed him to get around Peterson for the overall lead. From there it was all about putting in consistent, clean laps for Gregg.

Run Group Seven: Christopher Dashing, of Valrico, Fla., snagged the Super Touring Under win with a last-lap, last-corner pass. Driving his No. 111 Money Racing Honda Prelude, Deshong was part of the three-way battle for the lead that included Michael Flynn and Kyle Loustaunau. On the last lap, on the approach to Turn 17, Deshong got made the move for the lead. He was then able to win the drag race to the finish line.

The next stop for the SCCA U.S. Majors Tour Southeastern Conference is NOLA Motorsports Park, in Avondale, La. The doubleheader race weekend is slated to start March 7.

Additional information on the SCCA U.S. Majors Tour from Sebring International Raceway, including schedules, entry lists, live timing, PA streaming and streaming video, can be found at SCCA.com/SebringMajors. Timing can also be viewed on the Race Monitor app, for mobile devices.