Round Two of the Western Conference Wraps From Fontana 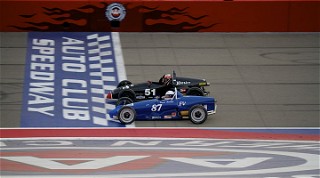 Seven race groups ran on the 21-turn, 2.8-mile circuit that uses both the infield road course and a large part of the oval superspeedway for the second time over the weekend, with Sunday’s races each stretching for 18 laps.

In action at Auto Club Speedway:

Group 1: It was a repeat of winners for most of the opening race group, beginning with Robert Green’s No. 92 Bullet Performance BMW 325 sneaking away from another battle with Carl Young’s No. 23 Tom Lepper & Associates Chevrolet Cobalt. Unlike Saturday’s race where he battled from behind, Green held on out front for the distance and the win.

Philip Royle took advantage of mechanical misfortune from Saturday winner Tom Wickersham and then a stumble by Tao Takaoka’s No. 03 Mazda RX-8, moving around Takaoka on the penultimate lap to take the Touring 4 win. Royle’s No. 09 Honda/BFGoodrich Tires Honda Civic was still a street car just a month ago.

Group 2: Spec Racer Ford began similarly to Saturday, with just the No. 69 Team Widget SRF of Denny Fosdick and the No. 90 East Anglia Motorsports SRF of Jack Wille battling back and forth early. But that fight allowed the No. 49 Flat Out Racing SRF of Marty Williams to sneak up on the pair and influence the action.

Williams moved into second, splitting the pair, while alternator trouble had Willes convinced he was relegated to third. Coming under the white flag, however, Williams relaxed slightly after misinterpreting it as the checkered flag. At the same time, Willes car came back to life, and he closed quickly to Fosdick on the banking.

In a repeat of Saturday, Willes moved around Fosdick just into the infield. That gap and full power was all he needed, hanging on for the final lap and taking his second win of the weekend.

Harris hung close, but it was just Acker and Miserendino under the white flag. Miserendino waited until then to use the draft on the banking to move around Acker, and took the win.

Group 3: The closest class battle in the fast wings and things group was for the overall win, with two Prototype 1 cars battling it out for supremacy.

Saturday winner Timothy Day’s No. 8 TJR Motorsports Stohr WF1 swapped the lead several times with Miles Jackson’s No. 52 Jackson Dean Construction Wolf GB08MJ. Day tucked in behind Jackson’s machine on the banking to draft with fears that the car couldn’t hold enough fuel to go the distance; meanwhile, the weekend was the maiden voyage for Jackson’s machine, and came with its own set of concerns. With a lap and a half to go, however, Day went for broke and opened up, moving around Jackson and taking the win.

After pulling in early on Saturday with only second gear in his transmission, defending Formula Mazda National Champion Mike Anderson pulled back into victory circle in the No. 1 HASA/Whiteflyer Formula Mazda. With a full gear box, Anderson was virtually uncontested on his way to the win.

Gary Hickman went two for two in Formula 1000 on the weekend, setting the pace in the No. 16 Edge Engineering Phoenix. David Ferguson’s Sunday was gold medal worthy as well, taking the win in the No. 75 Veracity Racing Data Van Diemen RFS-03/Mazda.

Group 4: Elliott Skeer led two laps in two races during the weekend at Auto Club Speedway, but those passes were good enough to take home two wins and the early point lead in the Western Conference Spec Miata.

Like Saturday, Skeer’s No. 17 Rush Motorsports Mazda Miata stalked Clement Lee’s No. 68 RM Autosport Miata for 17 of the 18 laps of the race. Once under the while flag, Lee kept Skeer from going around him coming off of the banking, but then the pair ran side by side for three corners before Skeer found himself on the inside and then into the lead.

Once in front, Skeer charged to the finish, leaving Lee with two second-place trophies despite leading nearly each lap of the weekend.

Group 5: The production group was full of weekend sweeps, led by Aaron Downey’s No. 5 Roundpeg.com/Mazda Mazda RX-3 racing to the overall group win in E Production. Joe Huffaker matched that feat in F Production, unchallenged in the No. 77 Huffaker Engineering MG Midget, while Jason Isley was two-for-two on the weekend in his H Production No. 99 Racer.com/Hoosier Toyota Yaris.

GT-Lite went to John Bower, in the No. 44 Nissan Sentra after post-race technical inspection.

Group 6: Attrition was the name of the game in the big bore group, with only a handful of cars running at the end. How bad was it? Even GT-3 winner Wolfgang Maike’s No. 15 Toyota/Red Line Oil Toyota Paseo broke just before he was about to take his victory lap.

Prior to that, though, Maike battled with and then drove around Michael Henderson’s No. 2 Mazda/Redline Oil/Goodyear Mazda RX-7 for the win.

Mike Lewis pulled his No. 12 Goodyear/Cyclo/Red Line Jaguar XKR off track early and out of the overall lead, but still earned the GT-1 win. Robert Kelly’s No. 66 Upracing.com Chevrolet Monte Carlo moved up both in his GT-2 class and overall as the leaders fell out, eventually taking the top spot.

Chris Qualls earned his fourth win of the weekend in the No. 73 Hasa Chemical/B&D Racing/Hoosier Ford Mustang with his American Sedan win, and Ken Davis’ No. 64 Davis Stone Inc. Chevrolet Corvette had his day ended by a blown clutch, but after covering enough distance for the win.

Group 7: One day after being taken out in an opening lap incident, Mike Lewis made sure he was clear of any trouble in Formula F by running out to a lead that grew to 13.872 seconds at the finish.

Lewis went flag-to-flag for the win, his third win of the weekend including GT-1, after crew spent a large part of the night repairing both he and teammate Bill Kephart’s cars following Saturday’s incident.

Formula Vee was a Dennis Andrade runaway on Saturday, but was a four-car battle for the lead for most of the distance on Sunday. Andrade’s No. 87 D & D Racing Vortech was joined by the Skip Streets (No. 51 Hoosier Mysterian), Mark Edwards (No. 74 Redline/Hoosier Glamdring), and Timothy Harris (No. 20 Apex Fire Systems Mysterian M3) early, but he and Streets shook free near the finish to settle it on their own.

Sheets had spent the early part of the race testing whether or not he could draft past Andrade before the finish line, and had consistently been able to pull it off. With that in mind, Sheets ran second on the final lap for the last dash to the finish.

Wondering after the race if he hadn’t been fooled by some crafty driving on Andrade’s part, Sheets’ final move fell about 12 inches – 0.018-second – shy of the win at the stripe. The win was the second of the weekend for Andrade.

The Western Conference Majors Tour continues with Rounds Three and Four at Chuckwalla Valley Raceway, March 21-22. The next U.S. Majors Tour event is a dual event for the Southeast and the Mid-States Conference at NOLA Motorsports Park, March 7-8.

More information, including results, from Auto Club Speedway is available at SCCA.com/AutoClubMajors.