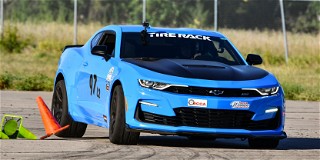 Not Long to Wait

The March 10-12 weekend at South Georgia Motorsports Park in Cecil, GA, kicks off the Tire Rack Solo National Tour. From there, the National Tour travels to Las Vegas Speedway in Nevada on March 31-April 2, Crows Landing in California on April 21-23 (although that date is currently listed as tentative), and Chase Airfield in Texas on May 5-7. In total, 12 stops comprise the series that constitutes the “Road to Lincoln” – a journey that ultimately leads to the Tire Rack SCCA Solo National Championships.

The Tire Rack SCCA ProSolo Series is similar to the Tire Rack SCCA Solo National Tour in that each weekend is a multi-day autocross of a National caliber, but unique in that each stop features drag race starts, often times in a heads-up style against the competition on mirrored courses. The pressure to perform is certainly elevated at ProSolo, because when the light turns green, the clock begins ticking.

This year’s ProSolo Series launches into action on Feb. 24-26 at Chase Field in Texas, followed by eight more stops along the way before reaching the Tire Rack SCCA ProSolo Finale in Lincoln, NE, on Sept. 1-3, 2023.

The CAM Challenge, meanwhile, resembles the Solo National Tour, but these events are limited to American muscle, as the “Classic American Muscle” moniker denotes; this year, the CAM Challenge will be joined by the Xtreme Street (XS) Challenge.

“We are excited that this year’s National Solo schedule includes not only many of our traditional stops across the country, but a couple of new venues as well, including the return to a location that has been missing from the schedule for a couple of years,” SCCA’s Director of Solo Rick Myers said, referencing new stops in Frederick, OK, and near St. Louis, MO, along with the return to Chicago, IL. “Culminating the year with a homecoming for the 50th running of the Tire Rack SCCA Solo National Championships is going to make 2023 a season to remember.”

With the New Year less than a month away, it’s time to add as many of the National Solo events to your calendar as possible. At the same time, keep in mind that external factors sometimes cause schedules to change. To that end, keep an eye on SCCA.com and the SCCA Solo homepage for updates, and follow SoloMatters on Facebook.