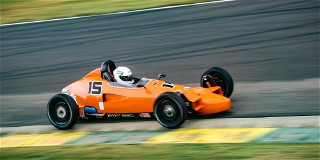 On Sept. 24-Oct. 2, 2022, hundreds of racers converged on VIRginia International Raceway to compete in SCCA’s pinnacle of road racing, the National Championship Runoffs. All 26 competition classes enjoyed a sunny week of qualifying, with drivers rocketing around the 3.27-mile, 18-turn circuit in near-perfect conditions. The Runoffs week always culminates in three days of intense winner-take-all championship racing, but this year Hurricane Ian entered the picture. What had been a picturesque week amongst the rolling hills of Alton, VA, turned into 26 unbelievable on-track battles for the Runoffs gold, with racers facing off against not only each other, but wind, rain, and their own nerves. It was a Runoffs weekend like no other – and now you can enjoy each race on demand whenever you’d like.

The races were originally streamed live on SCCA’s YouTube channel and other social media platforms, attracting roughly 100,000 live views during the Friday, Saturday, and Sunday races. Those on-track battles have now been packaged into individual races, making it easy to relive – or view for the first time – the best amateur racing in North America.

The three Hagerty Race Days during the 2022 SCCA Runoffs kicked off on Friday, Sept. 30, with Formula 500 taking to the track in wet conditions, largely setting the tone for some of the most challenging racing many Runoffs competitors have ever experienced. Following Formula 500 was Touring 1, and that – well – you’ll have to see to believe. The first day of Runoffs races then culminated in a Touring 3 battle that was as much of a nail-biter as they come.

Two more days of equally intense racing followed, with highlights including calculated pitstops in Prototype 1, a dramatic-yet-purposeful off-course excursion by the H Production leader, a wild seesaw of a GT-3 battle, and more.

Don’t waste another moment – click the link and get watching. Combined, it’s more than 20 hours of race coverage you won’t want to miss, so clear your schedule and get to it!