Adventure Found Thanks to Women On Track RallyCross Scholarship 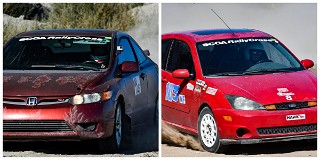 The Sports Car Club of America talks a lot about having #funwithcars. But a finer point is the adventure that accompanies playing with cars and being active in the Club. A splendid example of this rests in stories recently shared by Kelly Keefe and Shawna Bowman, recipients of the SCCA Women on Track RallyCross National Championship scholarship.

This particular SCCA Women on Track (WoT) scholarship, made possible in part by the SCCA Foundation, offered aid to two Regional RallyCross competitors so they could take part in the SCCA RallyCross National Championship conducted Sept. 23-25, 2022, in Fountain, CO, at Pikes Peak International Raceway. Funding from the scholarship helped with some travel expenses and covered the event’s entry fee.

For Shawna Bowman of SCCA’s Tennessee Valley Region, the 1,300-mile adventure to Colorado was an experience unto itself. She had never before undertaken such a road trip, which stretched across states she’d never visited. But with a beloved hamster by her side, off went Bowman to explore a previously unseen portion of the country – a trip that included a pitstop to the famed Pikes Peak mountain.

“Without having a truck or trailer, I got to drive the car I was going to be racing for the whole trip,” Bowman noted. “Thankfully, with the backseat laid down, my Honda Civic Si fit all the tires, tools, and personal items that I needed.”

As for the actual RallyCross Nationals competition, Bowman said it was a great experience. It’s no surprise she was a little nervous at first, but solid performances on the opening day did much to buoy her confidence.

“By the end of the first day, I was sitting in seventh in the Stock Front Wheel Drive class out of 11 people, with no cones hit,” Bowman recalled. “Sunday kind of caught me off guard. My first run of the day, I ended up hitting my first and only cone of the event, which dropped me further behind. I improved my time by close to three seconds on the second run and ran nearly the same time on my last run. By the end, I dropped down to ninth place in class.

“I had a great time and was still proud of myself for even being there,” Bowman added. “I drove over 2,800 miles roundtrip … and did all my tire changes and mechanical work all by myself, which gave me a small sense of pride. Overall, it was a great experience with lots of great people and great camaraderie.”

What constitutes an adventure is different from one person to the next. For Kelly Keefe of SCCA’s Continental Divide Region, her adventure at the 2022 RallyCross National Championship included overcoming setbacks while still having an amazing experience with her fiancée and co-driver, Eric Schaub.

“The competition was steep, and everyone brought their best,” Keefe said of the other participants. “With the wide-open courses, it was a matter of guts for how much speed you could carry into turns without getting sucked into the fluff.

“Neither of us, nor the car, were quite prepared for how much the ruts can hurt at greater speeds as compared to our tighter and more technical Regional courses,” Keefe continued. “As a result, there was a bit of drama when the car decided it was not going to finish Saturday’s afternoon course during my co-driver’s run.”

Thankfully, a fellow competitor graciously lent his car to the couple until repairs could be made to their primary vehicle. But it was that setback that actually generated an entirely different adventure involving other RallyCross participants that weekend.

“Since there were a bunch of us camping, fixing the car turned into its own social event,” Keefe said. “There was a whole crew of us working on the car, which made it fun. By Sunday, we were back in action and finished strong.

“I am continually impressed how the RallyCross community helps each other out, and I never feel like I’m on my own,” Keefe continued. “I’m already excited for next year's National Championship.”

In Keefe’s eyes, her visit to the 2022 RallyCross National Championship was a success. It began with her fiancée flying to Seattle so the duo could drive 1,400 miles together to Pikes Peak International Raceway. She then made friends, placed eighth in the 16-entrant Modified Front Wheel Drive field, and gained perspective on National-level RallyCross competition.

“Finishing the race was half the battle, and we definitely could not have done it by ourselves,” Keefe noted. “Now there is a whole list of things I want for the car, so we come back more prepared in the future.”

The SCCA Foundation fuels many scholarships distributed by SCCA Women on Track. Those scholarships give some SCCA members the chance to experience adventure through Club activities and share their stories.

You, too, can help share SCCA adventures with others through tax-deductible donations to SCCA Foundation, which can be made through the Foundation’s website. Donations can even be earmarked for specific programs. Click the link below to lend a hand and make a donation today!

Photo caption: Shawna Bowman, in the No. 94 Honda Civic Si (left), and Kelly Keefe, in the No. 103 Ford Focus SVT (right), had quite the adventures thanks to the SCCA Women on Track RallyCross National Championship scholarship.