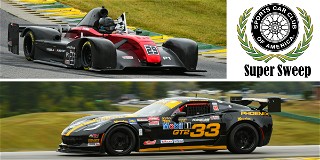 Established more than a decade ago in 2009, only 41 aces have ever earned the top Summit Racing Equipment SCCA Road Racing honor. Scott Rettich holds the all-time Super Sweep record with six. Well below that with two Super Sweeps are Michael Lewis, Matt Reynolds, Darryl Wills, and Danny Steyn.

The 2020 Summit Racing Equipment SCCA Road Racing season saw seven Super Sweep champions named, and 2021 had six winners. But for 2022, there are only two honorees – and both are first timers to the Super Sweep registry.

Chip Romer, a member of SCCA’s San Francisco Region, secured his first-ever Super Sweep at the 2022 Runoffs driving the No. 29 Stella Artois Elan DP02 Mazda during a Prototype 1 (P1) race that saw a portion of the track somewhat dry, and an important section very wet.

Starting third, Romer and the P1 field stormed into the first of 18 turns on the 3.27-mile VIRginia International Raceway circuit. However, a downpour was drenching the track’s southern section, including the critical Oak Tree portion. When P1 racers encountered the cloudburst, dry tires were less than useful. Chaos ensued as several competitors spun off track.

At that point, Romer and his team made a daring decision to pit and change to rain tires. That left him the last car on the lead lap, but he steadily stormed forth and took the top spot with only two laps remaining.

Romer held on to claim victory at the Runoffs, but not without an amazing effort those last two laps. Combine that with a 2022 Hoosier Racing Tire SCCA Super Tour Point Championship in P1, and his P1 U.S. Majors Tour Southeast Conference triumph, and Romer claims a well-earned Super Sweep.

Andrew Aquilante, from SCCA’s Philadelphia Region, entered the 2022 Runoffs with a shot at the GT-2 Super Sweep title. However, he and his No. 33 Phoenix Performance/Hoosier/Hawk/Mobil1 Chevrolet Corvette needed things to play out exactly right. Aquilante already claimed the 2022 U.S. Majors Tour Northeast Conference Championship in GT-2, but was behind Hans Peter and Jorge Nazario as far as the Hoosier Racing Tire SCCA Super Tour Point Championship.

The Tire Rack Pole Award winner in GT-2 at the Runoffs was Aquilante. Nazario started 11th, and Peter sixth. For things to fall his way, Aquilante needed Nazario to finish eighth or lower, and Peter to finish at least ninth.

A fierce battle raged at the front over 15 laps, and Aquilante was eventually declared the GT-2 Runoffs victor following a steward’s ruling. But the Super Sweep turmoil swirled behind for the entire race, materializing at a speed akin to sand slowly sorting through an hourglass.

Peter held fourth for the opening laps, and Nazario was sixth. On lap four, Peter fell to fifth and Nazario was seventh. But rapidly clawing their way back through the field were Mark Boden and Tim Kezman, two drivers who pitted in the first couple laps for a change to dry tires.

On lap seven, Boden dropped Nazario to eighth. On lap eight, Nazario ran ninth after being passed by Kezman. Peter hung tough until lap nine when Boden went by for what was ultimately a runner-up finish in the GT-2 class. Then on lap 10, Kezman was by Peter.