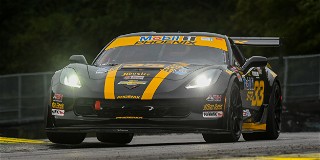 (Editor's Note: This article has been adjusted based on post-race penalties and now reflects official results.)

The 3.27-mile, 18-turn VIR circuit was soaked, wet, sort of wet in places, kind of drying, and somewhat dry during Runoffs races. Conditions for the GT-2 race remained baffling with a light mist falling around the course, a situation that sent several cars into the grass during the race prior to GT-2.

Andrew Aquilante won the GT-2 National Championship race in 2019 at VIR. This year, he claimed the Tire Rack Pole Award and led the 17-car field to the green in his No. 33 Phoenix Perf/Hoosier/Hawk/Mobil1 Chevrolet Corvette. Starting alongside Aquilante was Daniel Bender in the No. 36 Bravo Trailers Chevrolet Camaro. Both drivers on the front row were on dry race tires, many others behind them were running wet tires.

At the start, Aquilante moved to the front with Bender sorting into second. Third was Tony Ave, in the No. 04 Nissan 350Z, and Hans Peter was fourth. Kevin Allen, in the No. 4 Hoosier/Mallen Alley/FGR Racing Nissan 300ZX Z32, rounded out the top five after a handful of opening laps.

Working lap five, Bender closed onto the rear bumper of Aquilante. He even grabbed the front spot for a moment while traveling the 4,000-foot backstretch the following two laps. But Aquilante plunged into the Roller Coaster section each time with the lead once again.

That harrowing, synchronized dance down the backstretch happened a few more times during the 15-lap race. On the penultimate lap, traffic played a role and bunched up the top two drivers. On the last lap while going through the Roller Coaster, Bender and Aquilante made substantial contact, with Bender coming out in front and arriving first to the checkered flag.

However, race stewards penalized Bender two spots afterwards. That meant Aquilante, from Chester Springs, PA, not only won the GT-2 event for his 13th Runoffs gold medal, but he also earned a Super Sweep title thanks to winning a U.S. Majors Tour Conference Championship, a Hoosier Racing Tire SCCA Super Tour Nationwide Points Championship, and a National Championship at VIR — all within the GT-2 class this year.

“We worked very hard in that race,” Aquilante said after taking a gulp from the commemorative bottle of Mazza sparkling wine received during podium celebrations. “We were scrambling to make changes to the car just before the race. But we made a little too many adjustments to balance the car for the rain.”

Mark Boden made a tremendous push to earn his now-second-place podium position. After the race’s first lap, he pulled the No. 46 Wagner Custom Porsche 991.2 GT3 Cup car on pitlane, and the crew quickly changed tires to slicks. Boden, of Winnetka, IL, then reentered at the rear of the field, and skillfully stormed through competitors for his 18th appearance on a Runoffs podium.

“It was a fun race to go out there and drive through the field,” Boden said of Sunday’s GT-2 run. “The Runoffs are always great, and we love being here at VIR.”

Bender, from Northbrook, IL, finished third. For him, that’s a third podium finish at the Runoffs. “It’s always a challenge here at the Runoffs,” Bender said. “I was driving at 98 percent that entire race.”

Ave had his hands full for a bit, holding off a charging Allen for what became the fourth finishing spot. Tim Kezman, who pitted for dry tires earlier on his No. 144 Fall-LineMotorsports/Lemons ofLove Porsche 991.2 GT3 Cup, also made a fantastic drive to finish fifth. And Allen hung on to come home in sixth.

Photo: Andrew Aquilante, in the No. 33 Chevrolet Corvette, got the GT-2 win and Super Sweep honors during the Runoffs at VIR.