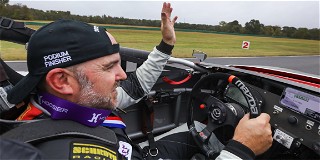 The 2022 F Production (FP) Tire Rack Pole Award at the 2022 SCCA National Championship Runoffs was earned by Eric Prill in his MaxtonsFight/JPM/Hoosier/Carbotech Mazda Miata. This was the fifth Runoffs pole for the Topeka, KS, resident in his 20th Runoffs appearance. It would also likely be his final race in this Miata, and his last Runoffs for at least a little while — all information we learned after Prill collected his third Runoffs gold medal in the thrilling FP Runoffs race that took place on the final of three Hagerty Race Days, Oct. 2, 2022.

Prill didn’t just claim this year’s FP pole at VIRginia International Raceway, he decimated the FP Runoffs qualifying record — that he set at the 2019 Runoffs — by 1.2 seconds. Prill also took the FP win at that event.

With misting weather, most of the 16-car FP field entered the 3.27-mile, 18-turn VIR racing circuit for their pace lap donned with intermediate wet tires. Of note was that defending FP champ Cliff Ira was equipped with the same setup he won the championship with last year in his Cliff Ira Motorsports/JPM Honda Civic Del Sol Si — he started directly behind Prill in third. Ken Kannard sat next to Prill in second in his Hoosier/G-Loc/JPM/OPM Autosports Acura Integra LS — a front-wheel-drive car with a penchant for speed at the Runoffs.

At the green, Prill rocketed into Turn 1, with Kannard dropping back fast, tangling with Kevin Ruck’s Hoosier/MCS Sus./AEM Electronics Acura Integra and another driver. In a shocking recovery, Kannard slid into the lead come Turn 3, although that charge was short lived, as Kannard’s slide continued into the grass.

From that, Prill gleaned valuable information. “You know, I learned something by how he did that because he rode the rim around the outside to Turn 1,” Prill said after taking the win in a tense final-lap battle. “When you're leading in those conditions, especially on that first lap, it's a total crapshoot for how much grip you have, and it's so easy to lose it in front of people. When there's someone in front of you, you can at least gauge — if they’re sideways — to back off. And if they've got it pointed straight, you're like, OK, I can at least go that fast.”

Prill led the pack of Charlie Campbell, Kevin Ruck, and Mason Workman through the Climbing Esses; when Campbell’s JPM/Barrington/Hoosier/Penske Mazda Miata slid in South Bend, Ruck made the pass. Into Roller Coaster, Workman passed Campbell and Ruck for second, although contact between him and Ruck resulted in Workman exiting the racing surface.

Lap two it was Prill’s turn, as he slid off track in Turn 3, dropping to fourth and handing the lead to Ruck, with Campbell, Bill Hingston, and now Prill in tow.

Campbell was on a charge, and passed Ruck for the lead — although Ruck was having none of it, and retook the position. Around the same time time, Hingston got loose in the Snake section, looped into the grass, and gifted third to a seemingly distant Prill.

Nearing halfway, Campbell once again made a pass on Ruck for the lead, with Ruck tucked in — perhaps allowing Campbell to find the traction in these uncertain conditions. Strategy or not, Campbell looped his Miata in Roller Coaster on lap seven, nearly tagging Ruck in the process. Ruck assumed the lead with Prill second — Campbell behind in attack mode, once again reclaimed second position.

With a handful of laps remaining, Campbell and Prill were catching Ruck, cutting what was an 11-second gap to less than six. On that charge, Campbell slipped once more in Roller Coaster, allowing Prill to slot back into second as Ruck attempted to thread through lap traffic.

“Roller Coaster was definitely my weakest point, and it was [Ruck’s] strongest,” said Corry, PA, resident Campbell. “He was getting a lot of run out of there down the straight — although it was tough all the way around.”

Come the final lap, the battle was truly on. Ruck led Prill by just over a second, with Campbell 0.7 seconds behind in third. The trio entered the Snake portion of VIR, shot into the Climbing Esses, and then into Oak Tree. While Ruck dealt with lap traffic once more, Prill ran through fast, completing the pass on the back straight headed into Roller Coaster. Ruck stayed tight to Prill’s bumper but couldn’t get the run out of Hog Pen.

“Going into Turn 1 on the first lap, I had a hard hit, and I don't know if that whacked something out of alignment, but from the first lap on I was getting smoked in a straight line,” Ruck, from Marysville, OH, recalled of what might have been a game-changing moment of the race. “[The power] was pretty consistent, but then around the middle of the race, it started missing in the lower RPMs.”

“I kind of expected Ruck to get a run and maybe come by me on the front straight,” Prill recalled of the final dash to the checker. “I looked in my mirror and was like, he’s not coming by me — I was like, holy smokes!”

At the stripe, Prill claimed his third Runoffs gold medal with Ruck 0.268 seconds back and Campbell 0.481 seconds behind Ruck — all three getting to spray Mazza sparkling wine during the Runoffs podium celebration.

Kannard, Workman, and David Strittmatter rounded out the top six, with David Colbey claiming the Sunoco Hard Charger Award for advancing from 17th on the grid to 8th in the race.