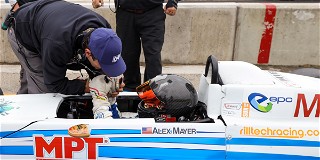 Chip Romer, the Tire Rack Pole Award winner, had control of the field at the start in his No. 71 Michelob Ultra Swift 016a Mazda. Alex Mayer started next to him in the No. 77 JDR Ford. Romer seemed to wait until the last minute to get on the gas when the green flag waved, and Mayer worked his way to the lead on entry to the first turn.

At Hog Pen on lap one of the 15-lap race, Romer spun and collected the No. 2 RSC Motors/Bob Wheless Dental Stohr F1000 VW driven by Anthony Seaber. Romer made it back to pit lane, but Seaber was stranded in the grass. That brought out a full-course yellow, and cars fell in line behind the safety vehicle.

At restart on lap four, Mayer stormed off with the No. 33 Stohr F1000 Honda of Rod Rice moving into second. Austin Hill, in the No. 8 Ligier Crawford JS F3 Honda, looked to have a sluggish restart and fell to third. Then it was J.R. Smart in fourth driving the No. 09 Smart Motors/Hurricane Hannah Swift 014a Mazda. But a few corners into the restart lap, Hill had gotten back around Rice for the second position.

Hill, who ran a wet Formula X (FX) race earlier in the day, stalked Mayer around the 3.27-mile, 18-turn circuit. But Mayer added to his lead bit by bit, and reached the checkered flag with a 35-second margin of victory. That makes two National Championships for Mayer, who is from Harleysville, PA.

“This feels awesome. Going flag to flag for the win is great,” Mayer said holding his commemorative bottle of Mazza sparkling wine. “I actually wish it was more treacherous out there, wish we had full-blown rain because that’s my favorite condition. But it turned out to be a dry race. So, I just put my head down, kept my cool, ran consistent lap times as much as I could, and made it to the checkered.”

With only a couple laps left, Hill duplicated what Romer did earlier in the race and spun at the exit of Hog Pen. That allowed Rice, of Austin, TX, to move into second and claim the runner-up spot for his first appearance on the Runoffs podium.

“I’d never been on this track before, so it was a big learning experience,” Rice said after the race. “I passed two cars on the start, and kept my nose clean, and managed my pace. It paid off better than I expected.”

Hill, of Frankfort, OH, was able to get back on track after his spin and salvaged a third-place finish, which made for his second Runoffs podium appearance on Saturday — the first coming in the FX event.

“It feels good,” Hill said about making the podium twice in one day. “I just wish we could’ve got second or even first in this race.”

Smart stayed out of trouble and brought his car home fourth. The Sunoco Hard Charger award went to Rice for starting sixth and finishing second.