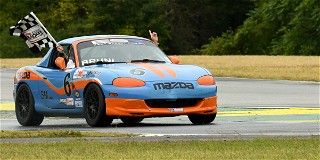 (Editor's Note: This article has been adjusted based on post-race penalties and now reflects official results.)

Spec Miata racer Nicholas Bruni — a local hailing from Arlington, VA — figured he stood a shot at being competitive during the 2022 SCCA National Championship Runoffs, but with changing weather conditions, off-track excursions galore, and a lead pack that never stopped shuffling, he likely never anticipated a race like this — or that it would end with him being crowned the 2022 Spec Miata National Champion.

Starting eighth of 60 in his No. 6 NickBruniRacing/East Street Racing 2002 Mazda Miata, Bruni wasn’t far off the pace, just 0.302 seconds off the Tire Rack Pole winner and four-time SCCA National Champion Danny Steyn in his Danny’s Angels/OPM/Rossini/G-Loc 2002 Mazda Miata. Truth be told, competition was tough throughout the field, with defending SM Runoffs champ Preston Pardus qualifying 0.025 seconds back on the grid in second, and just 0.8 second separating the top 12 starting positions.

To cap off the pre-race drama, conditions around VIRginia International Raceway’s 3.27-mile, 18-turn circuit were getting damp as the entire field exited the grid on the second of three Hagerty Race Days on dry Hoosier tires.

Into Turn 1 on the opening lap, the field raced cleanly with Steyn on the inside and Pardus to his left. Charles Mactutus was battling with Travis Wiley, who was splitting his week between the Runoffs and pro racing duties at Petit Le Mans. Wiley, though, went wide into the grass in the Esses while another spin at the Oak Tree turn resulted in contact mid pack.

Pardus then slid while exiting Hog Pen, placing second position in the hands of Mactutus, with Elivan Goulart pushing Pardus to fourth.

That was just lap one.

On lap two, Steyn danced through the turns with serious challenges from Mactutus and Goulart. A lap later, Steyn was shuffled to fourth, with Mactutus leading the charge in his OPM Autosports/G-Loc/Hoosier 2002 Mazda Miata in a tight, eight-car train as rain briefly began to fall on portions of the track.

Five laps in, the field was Mactutus leading, followed by Grayson Farischon, Goulart, Steyn, Zilisch, and Pardus; a lap later, Farischon made his move on Mactutus, claiming the point on the back side of the track. Two laps later and the lead reset to how it had been. Another lap and it was Goulart up front with Mactutus challenging once more.

The front pack was a constant shuffle, with Farischon dropping back, then Steyn and Bruni making contact into Roller Coaster and Pardus being collected in the process. Then Mactutus and Goulart slid off on Turn 1 as rain began to fall once more, allowing Zilisch to claim the lead around lap 10; he was followed by Bruni, Raiden Nicol, Pardus, Buras, Nick Leverone, Jonathan Davis — and on and on.

Working lap 11, a full course caution evaporated any gap Zilisch had managed to achieve up front.

“I was in tenth or ninth [after my off in Turn 1], and then the full-course caution came out,” said a smiling Mactutus. “I was happy about that – it gave me a chance again. Going into Turn 1 [on the restart], it was still wet there. I don't know if people had realized that yet, and they braked late.”

Nicol and Pardus dove deep and slid off track along with a few others, while Zilisch and Bruni tried to escape Buras and Mactutus, with Cabrera close at hand.

More shuffling occurred as the field headed into the final lap — then Zilisch slid off into Turn 1, turning the lead over to Bruni, with Mactutus now in tow. At Oak Tree, Mactutus set up for the pass on Bruni but slid mid turn.

“I was like, all right, I survived Oak Tree,” Bruni said in victory circle after spraying Mazza sparkling wine from atop the Runoffs podium. “Then it became a matter of Roller Coaster — where do you brake? Is it totally dry? Once I got through Hog Pen, I don't know, maybe halfway down the front straight I’m like, he doesn't have a run on me. This is mine!”

With Bruni and Mactutus in the top two positions, the final battle was between Cabrera and Peter Ensor for third as they drag raced to the checker. “It was a photo finish,” Cabrera said after the race

Indeed it was — Cabrera’s Eight-Six Race Engineering 2001 Mazda Miata crossed the stripe inline with Ensor's 1999 Miata, and the high-speed camera at start/finish showed the finish as an absolute tie. Consequently, third place was awarded to both Cabrera and Ensor.

Jonathan Davis and Rob Hines rounded out the top six, with Theodore Cahal earning the Sunoco Hard Charger Award with his run from 48th on the grid to 11th in the race.