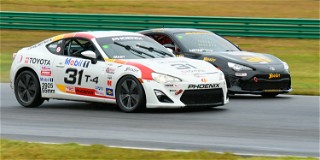 Setting a new SCCA National Championship Runoffs qualifying track record with a 2:09.577 (some 1.7 seconds faster than the record), John Heinricy earned the Tire Rack Pole for Touring 4 (T4), adding to his already impressive collection of 11 other Runoffs poles (not to mention 16 Runoffs gold medals). While starting on the pole is often ideal, it hardly guarantees success, as Heinricy discovered in 2019 when – like this year – the Runoffs took place at VIRginia International Raceway (VIR). Back then, transmission troubles struck Heinricy from the front – this year, mechanical problems were the least of his concerns as he had talented racer Marshall Mast to battle during the second of three Hagerty Race Days at the 2022 SCCA Runoffs.

At the start, Heinricy retained the lead with Devin Anderson’s TechSport/RedLine Oil/K1 Subaru BRZ on his tail. Third-place qualifier Mast and his Phoenix Performance/Hawk/Mobil 1 Scion FR-S struggled at the green, as did Sergio Zlobin’s Hoosier/Mazda RX-8, although Mast wasted no time recovering.

“I'm not used to driving this car — but second gear, I just forgot how quick it'll drive up hitting the limiter real hard,” said Denver, PA, resident Mast after the race. “I think I fell to sixth or seventh, maybe even lower than that. But you know, I got to picking people off.”

While Hienricy gained a slight advantage over Anderson in the opening lap, Mast and Marc Cefalo’s Planet Miata Mazda MX-5 were in a nose-to-tail battle for third. By lap two, Mast had driven back to his starting position, passing Cefalo while turning similar lap times to race leader Heinricy. Meanwhile, Zlobin was battling for fifth, trying to take the spot from 2019 T4 Runoffs champion Nick Leverone.

Come lap three of 15, Heinricy held a one-second advantage over Anderson, who had Mast pushing the point, going for — and completing — the pass for second in Turns 4 and 5. That side-by-side action opened a marginally larger gap for Heinricy, but Mast appeared undaunted, setting in for the chase.

Running wildly different lines through Turn 1 — Heinricy opening up the wheel to Mast’s tighter, often-sliding radius — Mast nosed in on Heinricy on lap six but couldn’t gain the advantage. That fight ran through lap six and into lap seven, when the real race for the top step at the Runoffs began.

Into Roller Coaster on lap seven, Mast attacked hard, diving deep and making the pass stick. Heinricy pushed back into Turn 1 on the following lap, but was ultimately forced to tuck in.

“I was pretty confident on the brakes,” Mast explained of the pass. “Going up into Roller Coaster, I felt like I just needed to be another car and a half deeper than [Heinricy] and just try to survive.”

Anderson had lost touch with the top two, but he had breathing room to Leverone in fourth, some 10 seconds back.

While the gaps changed to the checker, positions didn’t, although Heinricy’s late-race push did gain him some time.

“I didn't fight too hard [when Mast passed for the lead] because I felt pretty sure I'd be able to stay with him, and then I thought I'd be able to push back at the end,” Heinricy said. “I was trying to save the tires, but push him.”

Heinricy admitted that while catching Mast would be one thing, passing was another. “I would have had a tough time getting by him,” the Clarkston, MI, resident added.

“I’m happy I was able to compete with [Mast] and Heinricy,” said Anderson, who calls Moorseville, NC, home. “I felt like I could stay with them, but in the Esses they just slaughtered me. They have amazing car control — I was a little bit everywhere. But the fact that I was able to beat the people behind me, I mean, I'm thrilled!”

Leverone, Cefalo, and Kevin Fryer rounded out the top six, with Fryer earning the Sunoco Hard Charger Award for advancing from 11th on the grid to sixth.

Photo caption: Marshall Mast and John Heinricy battle it out for the lead in T4, with Mast ultimately taking the win.