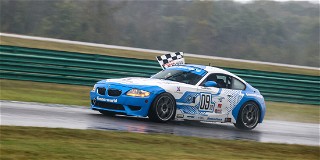 Touring 3 (T3) wasn’t supposed to be the last race of the day on Friday at the 59th SCCA National Championship Runoffs taking place Sept. 24-Oct. 2, 2022, at VIRginia International Raceway (VIR) — but that’s the way it worked out. A major oil spill coupled with torrential rains from the fringes of Hurricane Ian forced a one-hour delay that pushed the final race of the day to Saturday.

VIR’s 3.27-mile, 18-turn circuit — located along the border of North Carolina in Alton, VA — was a maze of standing and flowing water, blown by strong winds from the south as the T3 field gathered to race in the fading light of the late afternoon.

Jason Ott of Littleton, CO claimed the Tire Rack Pole Award in his No. 09 Alpine/Hoosier/BimmerWorld/BimmerHaus BMW Z4M, and he was joined on the front row by defending T3 champion Marshall Mast of Denver, PA in his No. 31 Phoenix Performance/Hawk/Mobil 1 Ford Mustang. Gridded just behind Jason Ott was his brother Steve Ott of Houston TX in the No. 26 Hoosier BMW Z4M, with past SCCA champion Rob Hines of Arlington, VA in the No. 4 TechSport Racing/Hoosier/G-Loc Nissan 370Z.

With the rain pounding and washing away the oil remnants, the field came to the green flag cautiously, and the leaders slipped into single file in their qualifying order. Mast followed Jason Ott closely, looking for an opportunity to pass that simply did not come. Hines and Steve Ott began racing for third position, and Hines solidified that spot when Ott went off course briefly and fell back.

The something that happened was that Mast slid off track into the grass as the leaders turned onto the front straight at the end of lap eight. Mast went wide and managed to get back on track, but behind Hines, who took over second place, albeit with a substantial gap to leader, Jason Ott.

In the second half of the race, weather conditions continued to deteriorate, and it was obvious that Mast’s Mustang was a handful in the deepening water. Steve Ott — back in the game — found his way around Mast on the downhill back straight in the tenth lap, and then went looking for Hines. The two BMWs had a distinct handling advantage over Hines’ Nissan and Mast’s Ford.

Steve Ott passed Hines to take over second place at Turn 1 on lap 11, putting the two brothers in the lead. Hines was having his own handling challenges, and an off-and-on excursion into the soupy grass allowed Mast to get by and take over third position. By this time, lap traffic was posing and entirely new challenge to the leaders.

“I’m sure they didn’t know we were coming,” Steve Ott said. “You can’t see anything behind you when it’s like that. The last three laps were just crazy, there was so much water coming across the track. The car would step out sideways on you in a straight line, so it was just about maintaining at that point and not chucking it off the track.”

The final laps of the race were much slower than the early laps as every driver struggled to maintain control. Both Steve Ott and Mast controlled major bobbles on the final lap, but held on to make the checker. With Jason Ott claiming his first championship after 20 Runoffs starts and several prior podium finishes, and Steve Ott finishing second, it was the first time since the 1980s that a pair of brothers took the top two positions in a Runoffs race.

“It was busy,” Jason Ott said. “The rain and the wind kept changing, so I was really trying to be smooth on all my inputs. Marshall [Mast] was super fast through the lower esses. He actually had a big run on me going into turn 1, but he pushed wide. He’s a very clean racer, and always races me fair, and we didn’t touch. It was just about minimizing my mistakes.”

Hines hung on to fourth, and Chris Hart of Yakima, WA finished fifth in his No. 5 BMW E46.

The top three were greeted at the victory podium with a bottle of bubbly form Mazza Vineyards, the “Official Sparkling Wine” of the Runoffs.

Photo caption: The Ott brothers — Jason and Steve — take a victory lap after taking the gold and silver, respectively, in Friday's T3 race at the 2022 SCCA National Championship Runoffs.