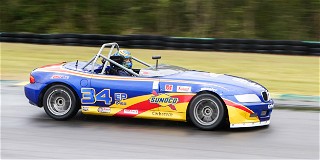 “It’s never boring when you’re out in front in the rain,” Prather quipped after the race, “because the only person who can screw it up is you!”

The track saw wet weather throughout the Hagerty Race Day thanks to the remnants of Hurricane Ian, but Prather did not screw it up. Instead, he drove a picture-perfect 15 laps of VIR’s 3.27-mile, 18-turn circuit, located along the border of North Carolina in Alton, VA.

Prather had previously taken the Tire Rack Pole award, starting from the inside front row, with John Hainsworth of Vineland, NJ sitting outside in his No. 95 Turf Trade/Hoosier/Carbotech Mazda RX-7. Just behind Prather at the start was past champion Jon Brakke of Milwaukee, WI in the No. 89 BMW Z3, with Tim Schreyer of Dubuque, IA sitting fourth in the Schreyer Motorsports/Hoosier BMW 325is.

Prather smoothly moved into the lead at the green flag, while Hainsworth slotted into second place. What no one expected was a bold rush by Joe Carr of Petaluma, CA, who charged toward the front from eighth on grid in his No. 12 Hoosier/Joe's Race Shop/Carr Racing Mazda Miata. Carr took up third place, driving on a set of hand-cut grooved slick tires.

Prather showed his experience, opening a gap and driving to his marks, leaving the field behind to sort themselves out. Behind Prather, Hainsworth, Carr, and Schreyer worked to put some warmth into their tires. Riding in fifth position was Peter Norton of Pelham, NC, driving the Omer Norton/Wilson Motor Co Lotus Caterham 7, ahead of Brakke in sixth place.

Norton first got around Schreyer, and began working on Carr for the final podium slot. He passed Carr on the third lap, and then set himself to chase down Hainsworth, who was about eight seconds ahead.

Meanwhile, Carr had a brief off-course slide, which cost him some time. By lap six, Schreyer’s BMW was filling the mirrors of Carr’s Miata before making the pass on VIR’s long, fast back straight. Carr reversed the pass when the pair reached Turn 1, setting up the most notable battle of this race.

By mid-race, Prather had opened a gap of 22.256 seconds, and began to drive with the care of a man with something to lose.

“I’ve got a bit of experience in the rain, and I’ve got a good setup on the car in the rain, and the car worked well,” Prather said. “I know you need to be smooth, and I know you need to look for grip, and I did that right away. The Hoosier tires and Carbotech brakes were very good. My wife was giving me the intervals every lap. Once it got to 22 seconds, I played more conservative.”

While Prather maintained his lead, Norton whittled away Hainsworth’s advantage until the ninth lap. Norton made his move as the duo headed into Turn 1 to begin the 10th lap, going side-by-side through the first four turns before Norton sealed the pass and took over second place.

“I was just driving to the best of my ability,” Hainsworth said. “I was keeping an eye on Peter [Norton] and I got some bad breaks in traffic. Then he was on me and set up a really nice pass going into Turn 4. Peter drove a great race.”

For Norton’s part, the race was a learning experience.

“This is the first time I’ve driven on rain tires!” Norton admitted. “So the first few laps, I was just trying to hold on and figure out what I could do. Then I started trying to work my way up. John and Jesse drove a great race, so I definitely had my work cut out for me.”

After Norton made the pass for second, there were no further changes to the podium, but Carr and Schreyer continued to race hard, with Schreyer making a last-lap pass to claim fourth position at the checker.

The top three drivers were greeted at the victory podium with a bottle of bubbly form Mazza Vineyards, the “Official Sparkling Wine” of the Runoffs.

The Sunoco Hard Charger award went to James Lindenthal of Morgantown, WV in the No. 18 RP Performance/Wildfire Engineering Mazda RX-7, gaining four positions during the race.