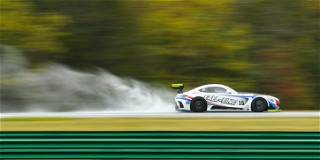 Tire Rack Pole Award winner David Pintaric led the field to the green flag in the No. 57 Kryderacing/AveMotorsports/Goodyear Ford Mustang with Michael Lewis beside him in the No. 12 Goodyear Jaguar XKR.

Just past the starter’s stand, Pintaric cranked up the power and spun his car around, giving Lewis an uncontested run into the first turn. To exacerbate his opening-lap problems, Pintaric then ended up in the tire wall around the Snake curves, followed by another “off” before completing the first lap.

Lewis tried to create a gap on the field, but reigning GT1 Runoffs winner Thomas Herb — in the No. 16 Fall-Line Motorsports Mercedes Benz AMG GT3 — closed in after starting fifth and narrowly missing Pintaric’s spinning vehicle at the start. Being quicker than Lewis, Herb soon moved by to take the lead on lap four of the 15-lap race.

Lewis soon found himself in the grass, then pulled into the pits on lap five, removing himself from the contest due to visibility issues inside the car. That placed Ryan McManus second in the No. 07 The McManus Agency Chevrolet Corvette, and third was Jeff Hinkle in the No. 9 trgdatacenters.com/Netdepot.com Dodge Challenger SRT.

Midway through the race, Herb’s lead on McManus was more than one minute, and McManus had another 20 seconds on Hinkle. However, with issues sorted, Pintaric was charging back towards the front, turning laps several seconds faster than any other driver on the 3.27-mile, 18-turn circuit.

On lap eight, Pintaric made his way by Hinkle for third. Only a handful of laps later, he had closed in on McManus, and moved around him to claim second. But while entering Turn 1 on lap 13, Pintaric slid straight off the track and ended up mired in the mud. That allowed McManus to pop back into the second spot, Hinkle to third, and Stephen Wiles to fourth in the No 22 KCR Cadillac CTS-V.

Herb, of Barrington, IL, was unchallenged almost the whole race, finishing nearly two minutes ahead for his second consecutive Runoffs GT1 win – with both victories coming in the rain. He also earned the GT1 Sunoco Hard Charger award.

“Last year … was an amazing experience to be out there in a Porsche that had half the horsepower and a third of the torque of a GT-1 car, and win,” Herb said after spraying Mazza sparkling wine from the top step of the victory podium. “But the conditions presented themselves, the timing was all right, and everything happened in sequence.

“This year, everyone knew it was going to rain,” Herb continued. “I just wanted to get through the first couple turns, and hopefully nobody would do something silly. But the green flag dropped, I see a car spin in front of me … and I was looking for a hole, then made it through the hole. Then all I needed to do is settle in, get focused, get a feel for the car … and just go.”

McManus, of Seville, OH, finished second and was quite pleased with his runner-up result. It’s his first podium appearance at the Runoffs, and a welcomed conclusion to a tough week.

“We broke a rear pinion on Tuesday in qualifying, then we had a support on the rear-end come off during Wednesday qualifying,” McManus said, adding that it took upwards of 15 hours to repair the issues. “So, I’m completely over the moon with this result.”

Hinkle, of Tomball, TX, came home third, and was also not disappointed with his finish, especially after his trip into the grass during the early portion of the race.

“If I’m off … there’s going to be a lot of ‘offs’ in our class,” Hinkle told himself after the mistake. “I just wanted to get this thing back on track, get going, shake it off, just wait, be patient, and don’t make any more mistakes.”

Wiles finished fourth, and Pintaric was credited with a fifth-place finish.

Photo caption: Thomas Herb leaves the rest of the GT1 field in his wake on the way to his second consecutive rainy Runoffs win.