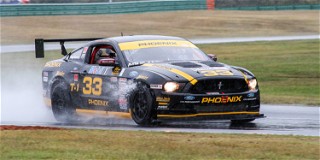 Eight hopeful drivers showed up to race for the Touring 1 championship on Friday at the 59th SCCA National Championship Runoffs taking place Sept. 24-Oct. 2, 2022, at VIRginia International Raceway (VIR). The 3.27-mile, 18-turn circuit – located along the border of North Carolina in Alton, VA – saw steady rain and gusting winds as the outer edges of Hurricane Ian moved into the area during the first of three Hagerty Race Days.

Tire Rack Pole Award winner Andrew Aquilante of Chester Springs, PA, brought his No. 33 Phoenix Performance/Hoosier/Hawk/Mobil Ford Mustang to seek his 12th SCCA National Championship. Mark Boden of Buffalo Grove, IL qualified second in the No. 46 Fall-Line Motorsports BMW M3, placing himself outside on the front row. The second row included Tim Myers of San Antonio, TX in the No. 2  G-Loc/Garages Of The Americas Dodge Viper, and local talent Joseph Gaudette of Manassas, VA in the No. 86 Over1G-Racing/Phoenix Perf/Hawk Chevrolet Corvette.

At the green flag, Aquilante grabbed the initiative and held his position, while 6th-place qualifier Sandy Satullo of Hillsboro Beach, FL charged forward in his No. 07 Crowned Eagle Racing BMW M3 to take over second place.

“We got off to a good start and I had some traction when we got to the green,” Satullo said. “I was able to get around Mark [Boden] before Turn 1. My goal was to hang on as long as I could, and that was about half a lap!”

Boden had a slower start due to the water collecting on the track surface. “Sandy had a great start,” he said. “The outside of the track had a little more puddle on it, so Sandy got by me. Then I looked in my mirror and saw a Corvette sideways in the middle of the track. I figured that would hold everyone else up, so I just went eyes-forward and looked for grip.”

The spinning Corvette belonged to fourth-place qualifier Gaudette, who dropped to the back of the field before rejoining the race. Meanwhile Boden found his way back around Satullo on the front straight and set his sights on Aquilante’s spray plume.

“I saw Mark and Andrew take off, and I thought I should just drive clean and finish the race,” Satullo said.

For the first half of the race, the battle to watch was between Gaudette, who worked his way back through the field, and Robert Korzen of Fredericksburg, VA in the No. 88 Elite Classics Ford Mustang. Under a continuous shower of spray from Korzen, Gaudette took several laps to find a way around. Gaudette would make up time in the corners, only to fall back on the straights. He got around Korzen in the 8th lap, and took up fourth position.

Meanwhile, Aquilante simply checked out and drove away, keeping his Mustang on the edge of what limited traction was available.

“I saw the green and put my foot down real gentle,” Aquilante said. “Mark [Boden] was falling back and I thought, I’m not even all the way in it! It took until about halfway through the race before the tires came in. And conditions were changing, it would lighten up and then we’d have to back off again.”

Aquilante kept up his pace, gaining distance every lap. At the checkered flag, he earned his 12th SCCA National Championship with a margin of victory of 1:53.637 over Boden. Satullo finished third, also earning the Sunoco Hard Charger award by gaining 3 positions during the race.

The top three were greeted at the victory podium with a bottle of bubbly form Mazza Vineyards, the “Official Sparkling Wine” of the Runoffs.