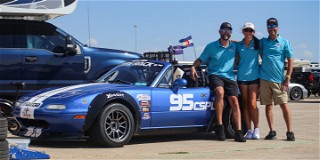 The 2022 Tire Rack SCCA Solo National Championships, taking place Sept. 6-9 at Nebraska’s Lincoln Airpark, will see more than 1,100 autocrossers take to two courses to determine the best of the best (keep up to speed on the competition all week with SCCA’s live timing feed). But there’s more to the Solo Nationals than winning. Walking the paddock reveals a plethora of stories just waiting to be told.

Here are but three.

Not long ago, Zach Williams didn’t know 2022 would be his first time competing at the Solo National Championships, but thanks to 2021 C Street Prepared (CSP) National Champion Jeff Schmidt and his daughter Hailey, this is shaping up to be one memorable year – for all of them.

Jeff built a CSP Miata, which he competed in while his young daughter wheeled Junior Karts. She graduated to the Miata at the age of 16. Then in 2021, she was asking about the Solo Nationals Championships – when Jeff couldn’t easily explain what the ‘Nationals’ experience was like, they headed to the event. “I won last year and wasn’t planning to come back this year,” Jeff admits, with his daughter quickly adding: “But I made him,” she laughs. “I was like, let’s go do this – let’s go! We have to!”

“Then we snagged [Zach] last minute,” Jeff explains. “We’d talked about him codriving if I was able to make it to Nationals.” For a while, it looked like the trip to Nationals wasn’t going to happen – “Then last minute, I told him plans have changed,” Jeff says.

“And here we are,” grins Zach.

Zach has good reason to smile. Heading into Wednesday’s competition, he sits second in the 19-entrant CSP field – not bad for someone who had only driven the car once before. “I’m having an absolute blast,” Zach says. “It’s always fun to hang out with kick-ass people. We have team shirts! We’re having a great time! It’s been fun and humbling.”

“Yeah, tell me about it,” Jeff cuts in while chuckling. Jeff is entering day two 10th in class.

But while the competition is great, it’s the experience of the Solo Nationals that Jeff, Hailey, and Zach appear to truly enjoy. “I came last year and I loved it,” Hailey explains. “The whole experience is great. I definitely did not win [in 2021], but the experience of hanging out with people, driving fast – it’s a great time. It’s the best daddy-daughter bonding experience ever.”

2022 introduced a National Tour Points Championship for the Tire Rack SCCA Solo National Tour, and San Francisco Region’s Rob Krider was intrigued. “This is the first year the National Tour is doing a points series, and I like something new, so I’m like, ‘I don’t have that trophy,’” he explains of what turned into a season-long journey for a points title and a car.

“I usually run a 2019 Ford Fiesta ST in H Street,” he says. “I went to the Las Vegas National Tour, got lucky and won that. I got really lucky at Crows Landing when nobody showed up, so I won that Tour. So I’m feeling good, looking good. I showed up at the South Texas National Tour with my Fiesta and had the greatest weekend – the car was on rails, I felt great, loved the [courses], but got my ass kicked by two 10th gen Civics. It wasn’t even close.” 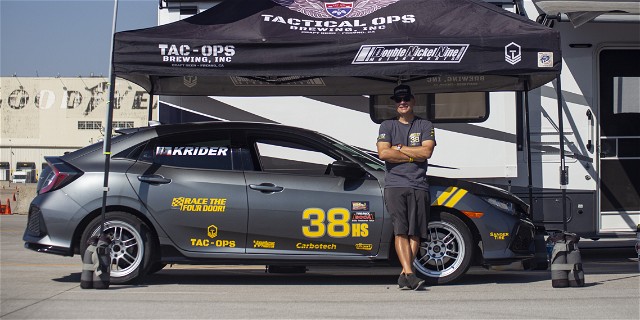 Krider found a competitor in a 10th gen Civic at the Peru National Tour who would rent a seat. “I flew in, drove his 10th gen Civic, won that Tour against nine other people, so I felt pretty good about that,” he recalls.

The next National Tour for Krider was the Finger Lakes National Tour. “I jumped in Peter Ling’s [H Street] Accord but didn’t do as well, scoring third place there. I needed to get another win, so I went to Packwood in my Fiesta. On the first day I went ahead and hit every cone I could find and put myself in the ugly points place; then I pulled it together on Sunday and won the event.”

With that, Krider entered the 2022 Solo National Championships with a “perfect” 300 points. Cameron Goode, his closest competition, scored 297.35 points during the season, so once he turned a wheel in another borrowed 10th gen Civic during Tuesday’s Solo Nationals competition, Krider became the 2022 Tire Rack SCCA Solo National Tour Points Champion for H Street.

Down, But Not Out

Running Heat 1 on the East Course on Tuesday, three-time Solo National Championships competitor Larry Kurtz was preparing for the start of a fun week. A first-run DNF in his F Prepared Datsun wasn’t an ideal kickoff, but it was the second run where things really went sideways.

“Going around a corner, I heard something snap and thought to myself, what was that? But I kept on going,” Kurtz says. “I went through another corner, and that’s when all hell broke loose.”

The problem resided in the front left of his 240Z, where the two bolts connecting the strut to the suspension arm utterly snapped. 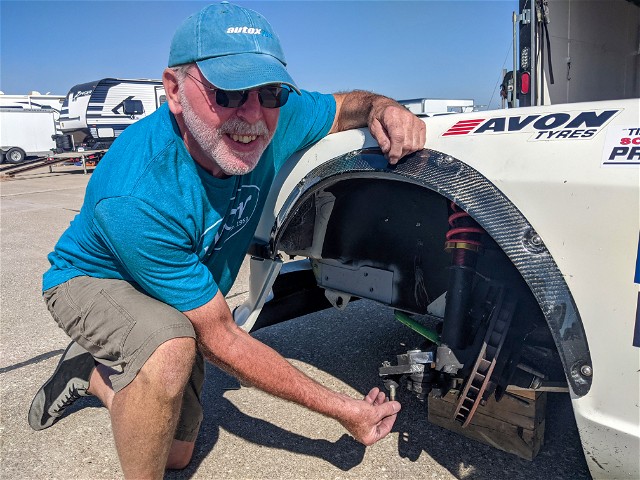 Back in the paddock, Kurtz was left trying to extract the threaded portion of the bolts, but the bigger problem was the tire. “Once the suspension broke, it drug and corded the tire,” he explains – noting he brought no spare tires.

Kurtz borrowed a friend’s car for his third run on Tuesday, the Nissan 370Z Matt Butz brought to the event. Butz had co-driven the 240Z the previous year with Kurtz, and now Kurtz is planning to close out his 2022 Solo Nationals on Wednesday in his friend’s modern Nissan.

Has this damage got Kurtz down? Far from it. He’ll wrap up this year, and then be back in 2023 for the 50th running of the Tire Rack SCCA Solo National Championships.