Hagerty Content: The SCCA Runoffs on a College Budget 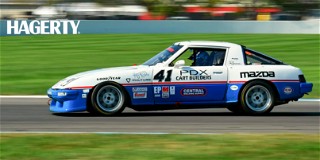 Wheel-to-wheel racing is expensive – it’s something nobody can afford, especially not young enthusiasts. While there’s truth to this statement, it’s also provably false, and Austin Bradshaw is here to tell you why.

Thanks to Hagerty’s Media page, Austin’s story of his 2021 SCCA Road Racing season is receiving plenty of press, and there’s a reason why. Austin is an enthusiastic road racer who does what he must in order to get on track. And in 2021, he decided the track he wanted to race on was Indianapolis Motor Speedway during the 2021 SCCA National Championship Runoffs.

“I have been a lifelong motorsports fanatic, especially when it comes to IndyCar,” Austin wrote on hagerty.com/media (Hagerty, it should be noted, is the Official Insurance Partner of the SCCA). “When the SCCA announced the National Championship Runoffs were returning to the Indianapolis Motor Speedway in 2021, I knew I wanted to find a way to be there. I grew up within the SCCA paddock, working on my father’s local race team in the Pacific Northwest. As a young boy, I watched many of my idols and friends compete at the SCCA Runoffs on television, which shaped my love and passion for the legacy club racing event.”

Being a young SCCA member, scraping together the cash to race while paying for college was a rough endeavor. Austin purchased a first-generation Mazda RX-7 and swapped in an older rotary motor he had on hand. From there, he hit the circuit to qualify, which involved a stop on the Hoosier Racing Tire Super Tour at Portland International Raceway, where he ultimately landed on the top step of the podium.

At Indy in late September 2021 for the SCCA Runoffs, things went well – until they didn’t.

“After the first two qualifying sessions on used tires, I found myself ninth and tenth, respectively,” Austin recalled in his article. “I was pleasantly surprised. For the final qualifying session, I put my new Goodyear slicks on for the first time and gained another 1.5 seconds, which put me sixth on the grid. Although it was just qualifying, I was beyond thrilled with that starting spot. Considering my RX-7’s trap speed was 6-15 mph slower than everyone who qualified in front of me, I was ecstatic to have the car working so well through the corners.

“Unfortunately, the race did not go as well as qualifying.”

What happened next? For that, click the link below and read on...