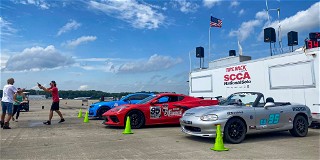 With 245 competitors on hand, the Tire Rack SCCA Toledo ProSolo hosted by Northwest Ohio Region held July 22-24, 2022, at Toledo Express Airport was both well attended and produced close finishes – this coming despite Mother Nature’s early plans to the contrary.

Lightning stymied competition early Saturday. Though a handful of runs were completed on the site’s grippy concrete before bolts shot down from a cloudy sky, the decision was made to scrap the morning results and reset for a 1 p.m. restart. Even with the delay, all drivers were able to complete six runs in drying conditions before day one came to a close.

Included in the throng were Aaron Liske and Perry Bennett, who were the Toledo recipients of the Howard Duncan ProSolo Greenlight Fund. The fund, supported by the SCCA Foundation, is named for the SCCA Hall of Famer and SCCA staffer credited with growing the ProSolo program. The initiative offers free entries to select, first-time ProSolo entrants. Donations made to the SCCA Foundation can be earmarked specifically for the Greenlight Fund.

Liske drove a 2005 BMW 325i in G Street. Bennett, who many know as a longtime photographer at National-level SCCA Solo events, put down his camera to take part in his first-ever ProSolo driving a 2000 Mazda Miata in E Street.

The largest field of the weekend, with 23 entrants, was the Street 5 class. Andrew Blasiman, posting two final fantastic runs in a 1983 Volkswagen Rabbit GT, came out victorious by 0.571sec over Mark Daddio in a 2022 Subaru BRZ. Mark McKnight was third in a 1988 Honda CRX, and Sam Karp finished fourth in a 2020 Honda Civic Sport. Fifth went to Devin Taylor in a 2019 Honda Civic Si, and a 1990 Mazda Miata driven by Andrew Salazar was sixth. The seventh and final trophy spot was claimed by Randy Pearson in a 2021 Honda Civic Type R.

Porsche drivers put on a show in Sport 3 (S3), the class boasting the weekend’s second largest field. The winning margin was just 0.111sec as Chris Dressler, in a 2018 Porsche GT3, bested a 2022 Porsche GT4 driven by Matthew Braun. Rob Clark was third in a 2020 Chevrolet C8 Corvette, and fourth was Doug Rowse in a Porsche co-driven with Dressler. Continuing the Porsche parade was Brian Conners, who finished fifth in a 2022 Porsche GT4, while Tom Corron was sixth in a 2017 Chevrolet Camaro SS. David Marcus grabbed the seventh and final trophy spot driving a 2022 Chevrolet Camaro.

One of the closest battles of the weekend went to the Ladies 3 class. Of the 11 entrants, Julie Heaton and her 2016 Subaru WRX earned victory by only 0.082sec over Chris Peterson in a 2016 Scion FR-S. Peterson’s co-driver, Jennifer Bedell, took third; and Emily Brown was fourth in another 2016 Scion FR-S.

Out of all the classes, however, it was the 17-entrant Street 1 field that produced the tightest finish. Steve O’Blenes, wheeling a borrowed 2004 Mazda RX-8, earned a 0.070sec victory over Randall Wilcox in a 1996 Mazda Miata. Craig Wilcox was third in a 1999 Honda Civic, and fourth was John Vitamvas in a 2005 Mazda RX-8 recovering from an engine failure. The fifth and final trophy went to Raymond Dsouza in a 2019 Mazda Miata.

Bonus Challenge: Eight drivers participated in the Bonus Challenge, but it was George Schmitt and Ben Weaver who faced one another in the final round. Weaver’s 2002 Chevrolet Corvette Z06 couldn’t quite get the job done, however, as Schmitt emerged victorious on his last run in a 1999 Mazda Miata.

Ladies Challenge: The Ladies Challenge came down to Laura Marcus in a 2022 Chevrolet Camaro, and Langlee King driving a 2020 Chevrolet Corvette. That Chevy battle went to Marcus after King triggered red lights on her last run. In the third-place runoff, Julie Heaton and her 2016 Subaru WRX won out over a 2021 Ford Mustang wheeled by Shelly Monfort.

Super Challenge: Twenty-nine drivers entered Sunday’s Super Challenge bracket, but Rob Clark came out the big winner in his 2020 Chevrolet C8 Corvette. It was Steve O’Blenes in a 2004 Mazda RX-8 who triggered red lights on his last run and fell to Clark in the final bracket. The third-place runoff was won by Dan Simms, driving a 2009 Chevrolet Corvette Z06, who bested a 2005 Mazda RX-8 driven by Tamra Krystinik.

One To Go in Oscoda

The final ‘regular’ season ProSolo event of 2002 is up next, that being the Aug. 5-7, 2022, Tire Rack SCCA Oscoda ProSolo slated to take place at the Oscoda-Wurtsmith Airport in Michigan.

Located along the western shore of Lake Huron, this will be the last chance for autocrossers to score points toward the 2022 SCCA ProSolo Points Standings. After that, it all comes down to the Sept. 2-4 Tire Rack SCCA ProSolo Championship Finale in Lincoln, NE.

Registration is open for the Tire Rack SCCA Oscoda ProSolo. But there is an entrant cap for this event, so reserve your entry today by clicking the link below.