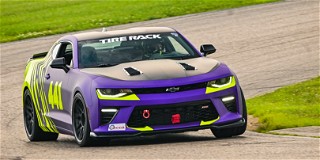 GingerMan Raceway has been on the Time Trials National Tour (TTNT) schedule each year since the program’s inception – and for good reason, as the road course offers nearly a dozen low risk yet incredibly challenging corners for drivers to master. The tradition continued July 16-17, 2022, when the Tire Rack SCCA Time Trials National Tour at GingerMan Raceway Powered by Hagerty visited the South Haven, MI, circuit.

Temperatures topped out in the low 80s with ample humidity during both days of competition. That humidity hampered engines and slowed cars on Saturday and Sunday – the rain on Sunday afternoon made for even more to overcome. All of that is to say that the overall TTNT track record at GingerMan wasn’t broken this weekend. Still, there were lots of speedy drivers and shiny machines that generated tons of fun.

With eight entrants, Tuner 5 (T5) was one of the largest TTNT classes of the weekend. Gabriel Argenta led the T5 field all weekend in a 1996 Mazda Miata, but Logan Senhauser in a 1999 Mazda Miata was never far behind. Argenta’s winning margin was only 1.295sec over Senhauser. Samuel Groothuis finished third driving a 2001 Mazda Miata.

Sport 2 (S2) also had eight entries, but class winner Karl Riggs was able to chisel out a larger margin of victory in a 2020 Chevrolet Camaro. After one TrackSprint and two TrackAttack segments, Riggs ended up with a 4.839sec win over runner-up David Colletti, who was driving a 2003 Chevrolet Corvette. In third, only 0.749sec behind Colletti, was Cody Franssen in a 2004 Chevrolet Corvette.

The Tuner 3 (T3) class produced one of the tightest finishes of the GingerMan weekend. Vito Jin, driving a 2004 BMW M3, was fastest in the six-entrant class during both TrackAttack segments of the competition. However, Lyle Zyra and his 2022 Toyota GR86 kept close. In the TrackSprint, Zyra was faster, which ultimately resulted in a 0.871sec win in T3 over Jin. Phillip Jue finished third in a 2003 Nissan 350Z.

Improving on individual lap times is a fun facet of TTNT events, and many drivers did just that at GingerMan. For example, Tuner 4’s Bernie Kaeferlein wheeled his 2016 Scion FR-S to a class victory by cutting a half second off his TrackAttack time from last year. James Groh, driving a 2001 Honda S2000, was runner-up in that seven-entrant field only 2.83sec behind, and Eric Jancsovics came home third in a 2020 Subaru BRZ.

With a lap of 1:36.251 in a 2019 Chevrolet Camaro, Christopher Bickford set a new best for himself on street tires in the Max 1 class. And Jeff Tucker, driving in the Tuner 1 class, turned a lap of 1:38.758 with his 2018 Chevrolet Camaro to drop a full second off his GingerMan time from last year.

One of the biggest gains of the weekend went to Unlimited 1 driver Dallas Reed. In his monstrously manipulated 2004 Mazda RX-8, he cut a full four seconds off his fastest TrackAttack time from Saturday morning’s practice to final runs on Sunday. While his best competition lap of 1:32.495 didn’t reset the overall GingerMan TTNT record, it was the fastest official lap recorded by anyone during the weekend.

Late Sunday afternoon, in the wet, KONI Podium Celebrations were held to recognize top performers in each class. Superlative awards were also handed out, such as Top Novice honors given to Karl Riggs for his victory in the S2 class.

The Most Improved award went to A.J. Helmus for cutting five seconds off his lap time from Saturday morning to Sunday afternoon in a 2022 Kia Forte. And the Crossover award, bestowed upon competitors coming from other SCCA disciplines, went to Sport 2’s Brandon Hagaman, a longtime autocrosser who was competing at his first TTNT event.

The Spirit of Time Trials honor was awarded to Heather Ingraham for embracing the ideals and themes of the Time Trials program. Her exuberance for Time Trials was on display all weekend as she interacted with other participants to make new friends, and cheered others on to do their best and have fun.

Finally, the Time Trials Champion award went to Vincent Taibi. A member of SCCA’s Indianapolis Region, Taibi was at GingerMan this past weekend not as a competitor, but as someone extremely interested in the Time Trials program and willing to lend a helping hand. Taibi brought with him several other members of the Indianapolis Region who are also interested in Time Trials activities, and the group as a whole were immensely helpful in making the weekend a magnificent event while learning more about conducting great Time Trials for their SCCA Region in the future.

Next, A Return to New Jersey

It was 2020 when the Time Trials National Tour made its first and only visit (so far) to New Jersey Motorsports Park (NJMP). That “so far” is no more, as the series returns to the Millville, NJ, venue for the Aug. 6-7, 2022, Tire Rack SCCA Time Trials National Tour at New Jersey Motorsports Park Powered by Hagerty. And joining the TTNT that weekend will be Global Time Attack, so you know it will be two days of amazing cars and lots of action.

Registration is open for those who want to challenge NJMP’s 10-turn, 1.9-mile Lightning Raceway layout. Click the link below and reserve your entry today for what will be TTNT’s fun and triumphant return to New Jersey.