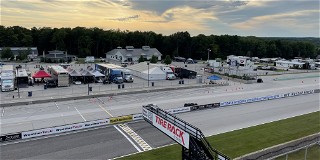 The Whitston Million: After 58 years, the name of the Formula Vee class likely isn’t going to change. But if it does, the Whitston family might have some input.

Zachary Whitston won on Saturday at Road America, followed by three more Whitstons… brother Andrew, father Ron, and youngest brother Steve. Zachary (we’re using first names now) crossed the stripe at the white flag behind Andrew, but made the move for the win on the final lap of the race by just 0.153-second. Ron and Steve were less than two seconds behind the lead battle.

“It worked out in a little bit of a game of chess at the end,” Zachary said. “We got four Whitstons in the top four, and that’s what counts.”

Stretch It Out: The Prototype 1 class put on a show at Road America on Sunday, with Chip Romer coming out on top by just 0.559-second over Todd Slusher at the end of 25 minutes. The race, which went the same 13 laps that Sunday’s races are scheduled for, involved some back and forth passing in Turn 5.

“These cars are made for these kind of tracks,” Romer said. “It was too much fun. Man, what a race. I don’t think I’ve ever had a race like that. We were pretty even all the way through and he got stuck behind some traffic. I was thinking, oh good, I can check out and relax a little bit. I got caught in the same stuff and that blue car was in my mirrors. We did two or three lead swaps down in Turn 5. What a great race.”

Under Pressure: When you bring an E Production car to Road America, the path to the win goes through Jon Brakke. That was true on Saturday, and Tim Schreyer accomplished his mission to take the win.

Schreyer chased Brakke through nine laps of the 25-minute race, keeping the pressure up until the white flag. Going into Turn 5, Brakke locked up his tires under braking and opened the door for a pass. Schreyer took advantage and raced to the checkered flag.

“This is CenDiv, this is a tough division,” Schreyer said. “I think Hoosier Tire is probably the only tire that is going to make it to the end tomorrow, just like last year. We kept the pressure on, and one tire brand prevailed.”

Sunday’s Schedule: Action continues Sunday morning from Road Atlanta with 35-minute or 13-lap races commencing at 9:00 a.m. Central Time. Tickets are available at the gate at Road America. If you can’t make it out tune in to SCCA.com for live Timing/Scoring, static video feeds, and the Super Tour Radio presented by Hoosier Racing Tire broadcast.