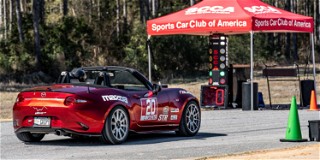 Next up is the June 29-July 1, 2022, Tire Rack SCCA Bristol ProSolo taking place in Tennessee at Bristol Motor Speedway – which is already sold out! You can sign up to be on the wait list, or start planning for any of the other ProSolos taking place this season. But before things get rolling again, let’s take a look at the ProSolo points championship battles that have been developing since the first green light shined in February.

At every ProSolo, competitors earn points toward various end-of-year accolades. A driver’s best two performances count toward their regular season points total, then additional points are added based on finishes at the ProSolo Finale in Lincoln.

Only seven points behind Gill and Woodbury is Jennifer Bedell; Jordan Towns currently sits in fourth with 81 points. The 2019 Fletcher Cup winner Kate Fisher is also still in the hunt with 77 points to date.

A complete rundown of current points for both the Johnson-Clark Johnson Cup and Fletcher Cup can be viewed by clicking the button below.

Growing ProSolo With the Greenlight Fund

New for 2022 is the Howard Duncan ProSolo Greenlight Fund, which offers free entries to select, first-time ProSolo entrants. In some cases, SCCA Regions hosting ProSolo events are given the chance to nominate rookie entrants to receive fiscal support. At other times, recipients are chosen through random selection.

Sam Mayorga and Joseph Parsons were the first two autocrossers to receive help from the fund back in April at the Tire Rack SCCA Fontana ProSolo. There, Mayorga finished sixth in Street Touring™ Roadster, and Parsons earned a trophy by finishing fifth in a Bump Class.

Lisa Gnesa and Connie Lu got assistance from the fund at the Tire Rack SCCA Crows Landing ProSolo. There, both drivers competed in Ladies Class 2, with Gnesa finishing 10th and Lu seventh.

At the Tire Rack SCCA New Jersey ProSolo, Jeremy Eisen and Todd Rushing were the drivers who received support from the fund. Rushing took 10th place in the Street 5 class, and Eisen drove to sixth in C Street.

Named for the SCCA Hall of Famer and SCCA staffer credited with growing the ProSolo program, the Howard Duncan ProSolo Greenlight Fund initiative is supported by the SCCA Foundation. An initial amount of $7,500 was generously provided by Brian Conners to establish this new program. Others can help support this project by visiting the SCCA Foundation website where donations can be earmarked for the Howard Duncan ProSolo Greenlight Fund.

The chase for ProSolo Class Championships is in full swing, too. Below is a quick look at the leaders so far. Each entry contains the car class: driver name and (points).