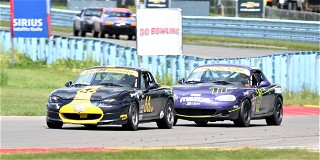 Watkins Glen International (WGI) is the site of this weekend’s penultimate event of the 2022 Hoosier Racing Tire SCCA Super Tour regular season. It is also one of the dwindling points-earning opportunities for young Spec Miata (SM) drivers enrolled in the 2022 First Gear Mazda Challenge (FGMC) championship.

SM drivers under the age of 25 as of January 31, 2022, are automatically eligible for the special FGMC points championship while competing at U.S. Majors Tour and Hoosier Super Tour events. Those who finish well in the standings at year’s end will earn added recognition, Hoosier Racing Tire contingencies, and a direct path to the Mazda MX-5 Cup Shootout.

Within FGMC is a sub-challenge that involves only Hoosier Super Tour races. Up for grabs in that subset is one free entry into the 2022 SCCA National Championship Runoffs taking place at VIRginia International Raceway (VIR) later this year. At WGI this weekend, two of the top three contenders in that subgroup will do battle.

Charles Mactutus is one such ace amidst the throng of more than 45 SM competitors this weekend. Now 25 years old and closing out his FGMC eligibility, he’ll be driving the No. 66 OPM Autosports/G-LOC Brakes/Hoosier Tires Mazda Miata.

Mactutus finished fourth in the 2021 FGMC standings. This year, he came into the mid-season Hoosier Super Tour event at VIR situated second behind Connor Zilisch, SCCA’s 2021 Jim Fitzgerald Rookie of the Year award winner. But going into this weekend at WGI, Mactutus is leading FGMC with 126 points. He also leads the SM Hoosier Super Tour Point Standings overall.

Now in his fourth year of SM competition, Mactutus credits a couple things for his improvement. First, he has moved from his family-run operation to the OPM Autosports outfit. Second, he has another year of seat time under his belt. And third, he has been receiving tutelage throughout the season from Danny Steyn, an accomplished SM driver who is also the reigning Super Touring Light Runoffs champ.

“Danny is really good at analyzing data. That has helped and has really been a factor this year. On track, we’re on the radio together, and that has helped for sure, too,” Mactutus said. “Thanks to that, I think I’ve gotten smoother with my steering, which is pretty important.”

Wiley is only in his second year of SM competition, but he came to SCCA with seven years of karting experience. That accelerated his performance in racecars. And now with a previous year of SM experience under his belt, Wiley just keeps getting faster.

“We’ve had really great pace all season,” Wiley said. “We’ve got a great setup … and a more put-together car. We’ve been slowly upgrading our original practice car into a full racecar … and we’ve been putting in the practice. Plus, I’ve got really great teammates.”

Looking towards the future, Wiley said he hopes to compete at the Runoffs. That will be a busy week for him, seeing that he’ll be racing at Michelin Raceway Road Atlanta in the days leading up to SCCA’s National Championship. After that, Wiley has his eye on running in a couple professional series next year while also jumping into SM from time to time.

What the future holds for Mactutus, he’s not yet sure. Options are being explored, but more SM racing is likely in the mix. Before that, however, he intends to be at the 2022 Runoffs. And showing up to SCCA’s National Championship after winning a VIR Hoosier Super Tour race earlier in the year certainly has him feeling good.

Both these young men are competitive, and they are both still very much enjoying their time at SCCA races. The SM class provides a lot of on-track excitement, and the SM community is a great one in the paddock.

“The general environment at the track is a lot of fun,” Mactutus said. “And it’s cool that Mazda is supporting the future of racing with the First Gear Mazda Challenge.”

Wiley echoed that sentiment, stating, “First Gear Mazda Challenge is a great championship, and Mazda is providing a little something to help us along. It gets some of the younger drivers more involved and more serious … and inspires racers to progress their way up through the ranks.”

If you can’t be at WGI in person this weekend to watch SM and all the Hoosier Super Tour drivers, follow the action live online at SCCA.com. There you’ll find enhanced timing and scoring, the Super Tour Radio presented by Hoosier Racing Tire broadcast supplied by Performance Motorsports Network, and a couple trackside video feeds.