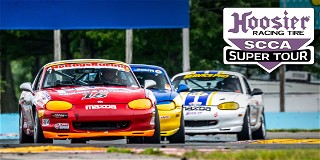 Believe it or not, the 2022 Hoosier Racing Tire SCCA Super Tour season is nearing its end. After the most recent action in Oregon at Portland International Raceway, the series now sees the penultimate race weekend of its 10-event schedule take place June 3-5, 2022, at Watkins Glen International (WGI) in Upstate New York.

Schedule for the Weekend

SCCA’s Finger Lakes Region will host this three-day event being held on The Glen’s 3.4-mile, 11-turn circuit – which includes use of the Inner Loop. WGI is one of North America’s foremost racing facilities, hosting its first SCCA event more than 70 years ago. It’s a course steeped in tradition that’s a handful for drivers of any skill level.

Things get rolling at 8:30 a.m. EDT on Friday, June 3, with practice for each of the seven race groups. Drivers then hit the track again on Friday afternoon for 25-minute qualifying sessions.

The pressure intensifies on Saturday, June 4, at 8 a.m. as each race group gets another qualifying session, this one being only 20 minutes in length. Racing then starts at 11 a.m. on Saturday with 25-minute sessions. On Sunday, June 5, racing begins at 8:55 a.m. with 35-minute or 14-lap contests for each competition group.

The full WGI Hoosier Super Tour schedule for the weekend can be reviewed by clicking the link below. To help drivers, crew, and volunteers stay abreast of schedule updates and other information, Finger Lakes Region will be deploying the Whova App for enhanced communication, which is the same app SCCA uses for its annual National Convention. After downloading the app and creating a login via a computer, phone, or tablet, search for “Hoosier” in the “Explore Events” section. Once the “2022 SCCA Hoosier Super Tour @ Watkins Glen” event pops up, click “Join” and enter the code "FLRSuperTour".

What to Watch at WGI

Like to see lots of colorful cars curl through the Esses at WGI? Then be sure to catch Race Group 1 and Race Group 2, which will be Spec Miata (SM) and Spec Racer Ford Gen3 (SRF3), respectively.

The SM field is poised to house more than 40 cars. Drivers to keep an eye on include Anthony Geraci and Elivan Goulart. Those two split SM wins last year during the WGI Hoosier Super Tour weekend. Then there’s Charles Mactutus, the current leader in both the SM Hoosier Super Tour Point Standings and First Gear Mazda Challenge.

With around 30 race cars, SRF3 will undoubtedly put on an exciting show, too. Current SRF3 Hoosier Super Tour Point Standings leader James Goughary will be one to watch in that race, especially since he’s coming off an SRF3 victory sweep at the PittRace Hoosier Super Tour. But don’t discount Charles Russell Turner or Denny Stripling. Turner currently sits second in the SRF3 point standings, with Stripling third after taking SRF3 wins Saturday and Sunday during the recent Hallett Hoosier Super Tour weekend.

History has proven you only need two Formula Vee (FV) drivers to make an exciting race, so with a dozen FVs scheduled to appear at WGI, it’s going to be a nail-biter. The lineup includes former SCCA Runoffs champion Rick Shields. Ryan Donaghy, who currently sits second in the Northeast Conference U.S. Majors Tour FV Championship Point Standings, is also on the entry list.

There will be much more to watch as the Hoosier Super Tour at WGI could have more than 215 total entries. For instance, Formula Enterprises 2 is set to have a nine-car field, and there are eight entrants each in GT-1, B-Spec, Super Touring Light, and Super Touring Under. Just a tick below that with seven competitors each are Touring 4, E Production, H Production, GT-Lite and American Sedan. No matter the race group, action will abound all weekend.

More information about the 2022 Hoosier Racing Tire SCCA Super Tour at WGI can be discovered through the event page.

The Hoosier Super Tour stop at WGI is open to those who love great racing or just want to spend the day in a park-like atmosphere learning more about SCCA. Admission is $30 for the weekend, or $25 for Sunday only. Children 12-years-old and younger are free with a paying adult.

Those who can’t make it to WGI in person can follow the action live online at SCCA.com. There, you’ll find the Super Tour Radio presented by Hoosier Racing Tire broadcast supplied by the Performance Motorsports Network team. SCCA.com also features enhanced timing and scoring, as well as a few trackside video feeds.