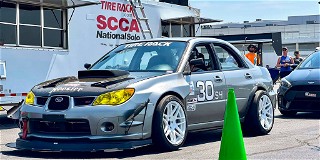 The calendar indicates it’s springtime, but it sure felt like summer on May 20-22, 2022, at New Meadowlands Sports Complex in East Rutherford, NJ, during the Tire Rack SCCA New Jersey ProSolo.

Mostly sunny skies, with temperatures in the low 90s both Saturday and Sunday, greeted 190 autocrossers who took part in the sixth of 11 “regular season” ProSolo event, this one hosted by SCCA’s Northern New Jersey Region. The venue featured grippy asphalt and ample paddock space, with plenty of room to create similar, open and flowing ProSolo courses.

Thanks to the Howard Duncan ProSolo Greenlight Fund, Todd Rushing and Jeremy Eisen were welcomed to their first ProSolo weekend. There, Rushing drove a 2016 Ford Fiesta ST to 10th place in the Street 5 class, and Eisen drove his 2004 Honda S2000 to sixth in C Street.

Street 1, sporting 17 competitors, was a hot topic by the end of class competition on Sunday. Tamra Krystinik, in a 2005 Mazda RX-8, took the win – but only 0.018sec behind was co-driver Andrew Krystinik, as well as John Vitamvas in a similar car. The tiebreaker came down to Index times, which earned Vitamvas the runner-up spot. Andrew came home third. Fourth in the trophies was Darian Taggart, driving a 2008 Honda S2000, and Greg Pollack was fifth in a 2004 Mazda Miata.

Another close finish occurred in B Street, where Geoffrey Wolpert and his 2021 Toyota Supra edged out a 2020 BMW M2 driven by Christopher Laprus. The margin of victory was only 0.038sec after eight runs.

With 25 drivers, Street 5 boasted the largest field of the weekend. Plenty of drama developed there as top contender Rich DiMarco experienced mechanical troubles on Saturday with his 1991 Mazda Miata. However, he got things sorted out and eventually emerged victorious. Brandon Dean, in a 1990 Mazda Miata, was runner-up only 0.335sec off the pace. Third was Marko Gidej in a 2016 Ford Fiesta ST, and fourth went to 2022 Subaru BRZ driver Ken Roller, who was a mere 0.068sec off the podium. Mark Daddio earned fifth in a 2022 Subaru BRZ, and Michael Roleira was sixth in a Mazda Miata. Rounding out the trophies in seventh was Brandon Dryer driving a 1991 Honda Civic Si.

The second-largest field of the weekend, Street 3 with 21 contestants, produced an even tighter finish. William Koscielny, wheeling a 2018 Fiat 124 Spider, eventually earned the victory by 0.190sec over the 2022 Porsche GT4 of Rachel Baker. Third was Jon Caserta in a 2019 Chevrolet Camaro, and fourth was the 2018 Porsche GT3 driven by Chriss Dressler. Only 0.044sec behind Dressler was Brian Conners in a 2011 Porsche GT3, who finished fifth. The final trophy went to sixth-place finisher David Marcus in a 2019 Chevrolet Camaro.

Bonus Challenge: Of the seven drivers entered in the Bonus Challenge, it was Erik Knorrmeier and his 2008 Nissan 350Z who faced a 2014 Scion FR-S driven by Alex Meramo. It was Knorrmeier who came out on top – at his very first ProSolo event.

Ladies Challenge: The final round of the Ladies Challenge came down to Annie Gill and Kate Claffie, who were co-driving a 2019 Mazda MX-5. While Gill claimed the Ladies Class 3 victory earlier on Sunday, it was Claffie who came back to take the Ladies Challenge win. Amy Wunsch, in a 2022 Subaru BRZ, then won the third-place runoff by besting Hilary Anderson Frank, who was in a 2007 Chevrolet Corvette.

For drivers who can’t make it to Lincoln Airpark in May, their next chance to compete in a ProSolo is June 29-July 1, 2022, during the Tire Rack SCCA Bristol ProSolo at Bristol Motor Speedway in Tennessee. Registration for that event is open, so you’ve got the “green light” to get entered today.

Stay on top of the full Tire Rack SCCA ProSolo schedule by visiting the ProSolo webpage.