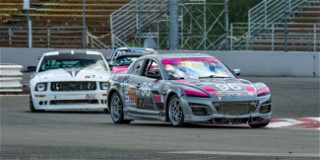 The eighth round on this year’s Hoosier Racing Tire SCCA Super Tour is underway at Portland International Raceway (PIR) in Oregon. The second and final West Coast Hoosier Super Tour event on the schedule, this stop takes place May 14-15, 2022, and is hosted by SCCA’s Oregon Region.

PIR’s 12-turn, 1.977-mile circuit is in play this weekend, which includes the thrilling Shelton Chicane to begin each lap. Things got rolling Saturday morning with 20-minute qualifying sessions, followed by 25-minute contests in the afternoon for each of the six race groups.

Rain overnight and into Saturday morning meant the course was wet when the first qualifying session began. But things dried out by the time the fourth group went out for qualifying. When racing began in the early afternoon, temperatures where in the mid 60s F with partly sunny skies.

Black Breaks Away: The first race of the day was Spec Racer Ford Gen3 (SRF3), which qualified on a very wet track in the morning. Because of that, many competitors may have set their cars for wet conditions. One driver who didn’t do that was John Black in the No. 17 Flat Out Racing car.

Black started second alongside polesitter Calvin Harris, but grabbed the lead within the first couple of corners. The opening lap, however, ended with a full-course yellow, bunching the cars back together.

Black got a great restart, and just stormed away all on his own for a five-second victory over Todd Harris and his two sons, Calvin and Taylor. That is something relatively uncommon in SRF3 competition, and not nearly the norm at PIR.

“I was kind of shocked, really,” Black said of Saturday’s race. “I think some people still had the rain setup on their cars. I just went out there thinking it’s dry, and drive like I did on the test day. I just put down lap after lap doing exactly the same. But it will be a lot different tomorrow, I’m sure.”

Group 2 Mixes it Up: The second race group was only able to run 12 laps Saturday before competitors received the checkered flag after a full-course yellow. Still, a couple classes managed to create some excitement.

In Super Touring Light, Kristina Etherington started dead last in the No. 98 EZ Racing Mazda RX-8. But in no time, she had moved up to second and was challenging Steve Borlik for the lead. In short order, Etherington put Borlik’s Mazda MX-5 behind her, then drove away to victory.

“Admittedly, I screwed up in qualifying. I did not go out on rain tires,” Etherington said. “But the weather was kind this afternoon, I had good tires, and there was a dry track. It was actually a really fun race.”

In the same race, a couple Touring 3 drivers made things interesting. Gamaliel Aguilar-Gamez, driving the No. 109 Racer on Rails/Redline Oil BMW 330i, was out front early. Chris Hart, however, drove his BMW 330i to the lead after only two laps. But luck wasn’t on Hart’s side Saturday as his car faltered, and Aguilar-Gamez went on to take the win.

“We had a not-great qualifying in the wet,” Aguilar-Gamez said. “But I got a good start and saw an inside lane to be able to jump into first position. We’ve had some issues with the car running hot, so I knew we were going to be a little down on power.”

“Chris got ahead of me a little bit,” continued Aguilar-Gamez. “Then going into turn one, I got to the inside, and Chris had a mechanical problem or something. But I will take a win. It’s difficult to win one of these races.”

Acker the Attacker: The Formula Enterprises 2 field consisted of four entrants Saturday. Owen McAllister started at the head of that class, and was able to create some distance between himself and TJ Acker running second.

Slowly, McAllister was reeled in by Acker in the No. 6 Bulldog Motorsports FE2 Mazda. On lap eight, the duo went at it for the lead, and Acker came out on top for the win.

“That was a lot of fun,” Acker said. “I had an opportunity early in turn one, and we both gave each other room. But he made a mistake, a small mistake, and I was able to jump and capitalize on it. Then he got caught up in traffic, which gave me a gap. I was able to maintain my pace and bring home a win.”

Soldiering On: The top two finishers in American Sedan had a doozy of a race Saturday. Roger Eagleton, in the No. 29 Circuit Hawaii/Five Star Property Management/DIG Motorsports Ford Mustang, led the entire way. However, his rearview mirror was filled almost the whole race by Mikhail Butenko in another Mustang.

About midway through the contest, Eagleton and Butenko encountered the McLaren 570S GT4 of Xuanqian Wang, which was running in the GT-X class. According to Eagleton, things got a little squirrelly at that point.

“My teammate Mikhail and I had a really good battle,” Eagleton said. “We had a little bit of an incident with the McLaren … but we decided to keep going. We were drag racing in the grass at one point, sideways, to get back on to the track. We both stayed out there … and it’s a life lesson. If things knock you down, just keep going.”

Sunday’s Schedule: A second day of on-track activity from PIR starts Sunday at 9 a.m. Pacific Time as drivers have another session of qualifying, these being 15 minutes apiece for the six race groups. Competition is then scheduled to begin at 11:55 a.m., with contests being either 35 minutes or 25 laps in length. Follow the action live online at SCCA.com for enhanced timing and scoring, the Super Tour Radio presented by Hoosier Racing Tire broadcast supplied by Performance Motorsports Network, and a couple trackside video feeds.