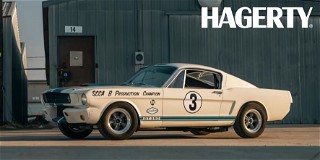 Among the many reasons our friends at Hagerty are a wonderful partner to the SCCA is that they love #funwithcars just as much as we do – and they are a wealth of knowledge on a variety of car-related subjects. The article below originally appeared on Hagerty.com. For this and all of Hagerty’s car-related content, visit their media site.

(Editor’s note: While the Bring a Trailer auction referenced in the Hagerty story below concluded on April 22, 2022, with the SCCA B Production Shelby GT350R selling for $875,000, the story within remains a fascinating one.)

Airdrop Carroll Shelby into 2022, and there’s no doubt he would find success as what we today call an influencer. Back in the day, the Texan knew how to keep his name in headlines and households across America. So, when Shelby American, a ragtag group of American hot-rodders, won the 1965 FIA World Manufacturers Championship of Makes for GT cars – the first group of Yankees to ever do so – and the accomplishment fell to the back pages, Shelby knew he had to awaken the world to their excellence.

Shelby commissioned a cross-country promotional tour to showcase his winning rides. Utilizing a two-level, 42-foot enclosed trailer, members of the team toured 12 cities in four weeks, with several race cars – 427 Cobra, Ford GT40, Daytona Coupe, and 1965 Shelby GT350R – in tow. Each stop was a designated Shelby dealership, where the road-goers were parked next to the track stars. Crowds flocked.

Now, the very same GT350R that traveled across America in this so-called “Cobra Caravan” is for sale on Bring a Trailer. Riding on chassis 5R213, the SCCA B Production GT350R is one of 36 turn-key race cars (including two prototypes) built by Shelby American complement to the production Shelby Mustang coupe…

Photo by Bring a Trailer