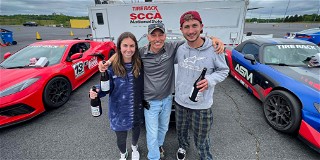 Following two stops in California, SCCA’s ProSolo Series headed east on May 6-8, 2022, for the Tire Rack SCCA Charlotte ProSolo, an event hosted by Central Carolinas Region. It was the season’s fifth event, with 211 drivers in attendance at zMAX Dragway in Concord, NC, located just across the street from Charlotte Motor Speedway.

The zMAX Dragway facility is fantastic for a ProSolo, offering smooth asphalt for a magnificent launch surface. Plus, the venue has ample room to create mirrored courses. And to perhaps recognize the dragstrip venue, the layouts designed by Sam Strano featured long straights to begin each course.

Skies were mostly sunny, with temperatures expected to top out in the 70s, when competition got underway on Saturday. Clouds moved in as the morning progressed, and rain hit just before the lunch break. Even though there was a slight delay for lightning, showers soon passed and things dried out so drivers could complete all eight runs.

Sunday saw breezy and cool conditions. Temperatures climbed into the upper 50s as drivers completed four more runs under cloudy skies to decide the class winners. After that, it was time for the Challenge portion of the program.

Saturday saw tight matches in nearly all classes, proven by the fact that most leaders at day’s end held an advantage of less than one second.

Mike Ferchak, in a 2013 Scion FR-S, led Saturday’s 17-entrant Solo Spec Coupe field by 0.850sec over a 2013 Subaru BRZ driven by Alex Piehl. The next day, D.J. Alessandrini pulled off two mighty final runs in a 2013 Scion FR-S to leapfrog his way from third on Saturday to first come Sunday by 0.529sec over Ferchak. Piehl held on to third, and fourth was won by William Bostic in a 2015 Scion FR-S. The final trophy spot went to Tony Savini in 2016 Subaru BRZ.

The Race Tire Index 1 (R1) field was led on Saturday by Eric Clements in a 1994 Van Diemen RF94. Fighting serious brake issues, he was able to eke out a 0.008sec advantage on Matt Feeney in a 2008 Novakar. Paul Wright was third in a 2021 Birel Shifter Kart, then Clements’s co-driver and son, Jonathan, was fourth. However, 0.193sec was the difference between the four contestants.

Sunday saw a shakeup in R1 as Jonathan Clements, who helped fabricate a set of rear rotors to correct brake issues at the front of his car, churned out two fantastic final runs to claim a 0.311sec victory. John Ryan charged from fifth on Saturday to second on Sunday in his 1974 Dulon MP15. Eric Clements salvaged a third-place finish, and Paul Wright claimed the fourth and final trophy position.

There were other swaps at the top from Saturday to Sunday, such as the one that arose in Street Touring Roadster (STR). Josh Luster led STR on Saturday in a 2019 Mazda MX-5 Miata. By the end of Sunday, Billy Davis jumped from third to first in a 2019 Mazda Miata. Behind by 0.427sec was Luster. Marcus Pyne was third in another 2019 Mazda Miata, and Mark Labbancz was fourth, codriving with Luster. Tim Aro took the fifth and final trophy in a 2020 Mazda MX-5 Miata.

The Street 4 class was a battle amongst Aarons. On Saturday, Aaron Shoe was best with a time in his 2006 Mitsubishi Evo that was 0.749sec better than the time turned by Aaron Buckley in a 2016 Audi TT. But by Sunday afternoon, Buckley had picked up the pace and came home a winner by 0.449sec over Shoe. Karl Shultz was third in a 2016 Audi TT, and Myke Dziengel was fourth in a 2006 Subaru STI.

Street 5 (S5) also saw action up front. By 0.442sec, Geoffrey Zimmer and his 1977 Volkswagen Rabbit had the lead on Saturday over Mark Daddio in a 2022 Subaru BRZ. Then Sunday rolled around and Rich DiMarco went into action, climbing from fourth on Saturday to win S5 on Sunday by 0.402sec in a 1991 Mazda Miata. Daddio was second, and Zimmer third. Ken Roller, in a 2022 Subaru BRZ, was fourth. DiMarco’s co-driver, Nick Pasternack, claimed the fifth and final trophy.

The closest finish of the weekend came in Race Tire Index 2 (R2), where Chris Raglin, in a 1986 Honda Civic, was only 0.105sec better than runner-up Shawn Lambert, who was in a 2004 Mazda Miata. Third in R2 was Justin Peachey, driving a 2007 Chevrolet Corvette Z06, and the final trophy went to fourth-place finisher Ryan Huffman in a 2002 Acura RSX Type S.

The second-closest finish in Charlotte occurred in the 13-driver C Street class. There, Will Teller and his 2019 Mazda Miata earned a 0.143sec victory over a 2020 Mazda Miata wielded by Timothy Maxey. Third went to Christian Kolmers in a 2019 Mazda Miata, and the final trophy was claimed by John Wolf in yet another 2019 Mazda Miata.

Another 13-driver field was found in the Ladies 2 (L2) class. Langlee King and her 2020 Chevrolet Corvette led L2 at the end of both Saturday and Sunday, thus earning her very first ProSolo victory. Behind King was Jordan Towns by 0.630sec in a 2021 Mazda MX-5 Miata. Laura Marcus was third in a 2022 Chevrolet Camaro, and codriver Cindy Duncan took the fourth and final trophy.

Another first-time ProSolo winner on Sunday was Rob Clark. He triumphed in the 15-entrant Street 3 class driving a 2020 Chevrolet C8 Corvette. Doug Rowse was runner-up by 0.763sec in a 2018 Porsche GT3, and codriver Chris Dressler was third. Fourth went to Sam Strano in a 2021 Ford Mustang, and the 2011 Porsche GT3 piloted by Brian Conners claimed the final trophy.

Super Challenge: There were 25 drivers entered into the Super Challenge. The semifinals saw Darrin DiSimo in a 2019 Honda Civic Si beat the 2019 Mazda Miata driven by Christian Kolme; meanwhile, Jonathan Clements in a 1994 Honda Van Diemen bested Eric Peachey and his 2008 Dodge Viper. The last two runs in Charlotte came down to DiSimo and Clements, with DiSimo claiming the final triumph, winning the Super Challenge.

Battlefield of Giants & Jets Ahead

Next on the 2022 Tire Rack SCCA ProSolo calendar is a visit to Meadowlands Sports Complex. Located in East Rutherford, NJ, alongside MetLife Stadium – home of pro football’s Jets and Giants – the venue will be the playground of autocrossers come May 20-22, 2022, during the New Jersey ProSolo.