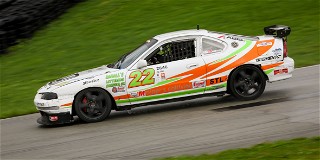 Hoosier Racing Tire SCCA Super Tour action wrapped up Sunday from Pittsburgh International Race Complex (PittRace) during an event hosted April 29-May 1, 2022, by SCCA’s Steel Cities Region. The weekend was the seventh of 10 events on the 2022 competition calendar, and saw seven race groups take to the 2.78-mile, 19-turn circuit located in Wampum, PA.

Friday and Saturday saw lovely spring weather perfect for on-track activities. However, storms started to roll through the area early Sunday morning, and rain came down intermittently throughout most of the day. That meant a majority of drivers across the seven race groups had to adjust to wet conditions.

Better Wet: The story Saturday in Super Touring Lite was Greg Maloy vs. Max Gee. Maloy took control of the race early in the No. 38 Hooter Engines Honda CRX, but only had a 0.6sec gap on Gee. Midway through the race, that gap was still only 1.1sec back to Gee. From there, however, Gee fell away, and Maloy went on to a 14sec win.

“Max and I had a good race,” Maloy said on his way to Saturday’s victory podium. “I had a good run, and it was lots of fun.”

Sunday, in the wet, it was Gee in the No. 22 Gee Motorsports/Hoosier/Carbotech Honda Prelude who got out front first. Maloy was chasing for a bit, then fell out of the race after three laps. Following an extended black flag session to clean up an incident in turn 17, Gee was able to come home a winner over the Mazda Miata of Amy Mills.

“Some slower race traffic slowed us down yesterday,” Gee said Sunday. “Today, the car was hooked up in the wet around here. I love racing in the rain. It equalizes everything, and it’s really fun.”

The black flag stoppage played a key role in the Super Touring Under battle Sunday. Chip Herr, Saturday’s winner in the No. 24 Warwick Autopark/MCS Shocks/Carbotech/ROUX Helmets/Hoosier Tires Audi A4, was dominant and looked poised to repeat his performance Sunday in the wet. But on the restart lap, he tangled with another competitor and ended up out of the race. That handed the lead and victory to Anthony Piselli in the No. 14 Subaru Impreza L.

“I couldn’t see anything,” Piselli said about the restart in the wet. “I was just playing it cool and not taking any chances after the rain.”

On the fourth lap, Benazic moved to first and Vickerman second, leaving LaManna languishing in third and losing ground on the lead duo. The following lap then saw Vickerman move by Benazic in turn 15 for the lead.

A full-course yellow came out, and the field bunched behind the pace car. That gave LaManna a chance to get back in the hunt. At the restart, Vickerman ran into problems and dropped out of contention. That left Benazic with the lead, and LaManna giving chase. With three minutes left in the 30-minute race, LaManna made his move. He got by Benazic and forged ahead for a 0.381sec victory.

“The three of us were working through some traffic at the restart, and Eric got the unfortunate end of it,” LaManna said. “Enrik and I were switching back-and-forth until the end. It was just a battle of who could find the dry line with degrading tires.”

Also in the sixth race group, B-Spec’s Ryan Moran and his Mini Cooper led every lap  -- except the one that mattered. Behind him were fellow Mini Cooper drivers Dan Sheehy and Frank Schwartz, as well as the Honda FIT of Matt Downing and No. 52 Hawk Performance/Flying Ghost/Frozen Rotors/Mobil 1 Ford Fiesta of Matt Giuffre. Those four were mixing it up to secure the runner-up podium spot.

Noted previously, a full-course yellow bunched up the field. Still, Moran maintained the lead at the restart. But when he crossed the line to begin the final lap, Giuffre and Schwartz flanked him, the later having started at the back of the pack for Sunday’s race. When they came back around to receive the checkered flag, Giuffre was out front. Schwartz was second and Moran third.

“I made a gamble and went out on slicks,” said Giuffre, who was competing in his first-ever B-Spec race weekend. “I was told while sitting on grid right before I went out to race, patience was the key. We were hoping the track would dry out and the tires would come in. I stood back and watched the guys in front of me battle it out. Then I just picked them off at the last moment.”

Sun Shines on Formula Vee: The sun came out and shined down on the final race group of the day, which included the Formula Vee (FV) field. Blow-by-blow details of that battle could fill pages of a spiral notebook. But for brevity’s sake, the mêlée came down to Brian Farnham, Zachary Whitston, and Saturday’s FV winner Andrew Whitston, who was driving the No. 12 Rocket Motors/Subway/Hoosier Protoform P2 car.

Lap to lap, or corner to corner, any member of that trio could be found out front. For nearly the entire race, the top three were never separated by more than a half-second. When they crossed the start line to begin the final lap, 0.170sec was the difference between first and third.

After spending a chunk of the 30-minute race as “meat” sandwiched between two Whitston brothers, Farnham’s hand could be seen pumping furiously into the air with glee as he crossed the finish line first in the No. 3 Hoosier/Carbotech/Autowerks/Kearney Driver Development Silver Bullet SB1 sled. Zachary was 0.106sec behind in another Protoform P2 car, and Andrew was third.

“We just had a blast. It’s always great running with the Whitstons,” said a grinning Farnham during the post-race victory podium interview. “We were just passing everywhere and having a great time. I couldn’t ask for a better finish, running with these guys who are the best in the country.”

Breaking Records: Conditions Sunday were not conducive for establishing new track records at PittRace. Saturday, however, saw seven new benchmarks set. Chip Herr now holds the STU record with a 1:52.885, and Greg Maloy now has the record in STL with a 1:55.732 lap.

The GT-1 lap record is now 1:38.986 and belongs to David Pintaric in the No. 57 Kryderacing/Ave Motorsports/Goodyear Ford Mustang. American Sedan racers also have a new target to shoot for as Kurt Rezzetano, driving the No. 18 Phoenix Performance/Hoosier/Hawk Ford Mustang, turned a lap of 1:52.440 to reset the record in that class.

Post-Race Winner Interview Videos: The SCCA Road Racing Facebook page is where videos can be found featuring one-on-one interviews with several Hoosier Super Tour winners from Saturday. Victory podium broadcasts/videos from Sunday are accessible there, too.

Racing Goes West, Again: The second of two Hoosier Super Tour weekends conducted west of the Rockies in 2022 is up next, this one happening May 14-15 at Portland International Raceway in Oregon. The lush, 1.97-mile circuit situated alongside the Columbia River has 12 turns, and it’s a “can’t miss” event for racers throughout the Northwest and all along the Pacific Coast. Driver and worker registration is open for that event, and everyone is encouraged to come play with SCCA in Portland.