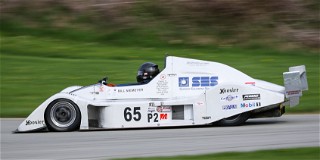 Pittsburgh International Race Complex (PittRace) is the venue this weekend for the seventh round of the 2022 Hoosier Racing Tire SCCA Super Tour. An event hosted April 29-May 1, 2022, by SCCA’s Steel Cities Region, Saturday opened with morning qualifying, followed by 25-minute races for each of the seven race groups.

Temperatures were in the low 60s F, with a very light breeze and slightly overcast skies, when competition began in the afternoon. The challenge was PittRace’s 2.78-mile, 19-turn circuit situated in Wampum, PA, about 45 minutes north of downtown Pittsburgh.

With some very accomplished T2 drivers in the field, Mast jumped to the lead at the start and built a gap back to the BMW E92 M3 of Joe Koenig. Midway through the race, Mast’s lead was just about six seconds. That gap grew to 12 seconds for a bit before Mast took the win.

“Figured we’d try the car in T2 and see what it could do,” Mast said with a grin afterwards. “The car ran pretty good today, I guess.”

“Never Quit” Spirit: There were only two competitors on track Saturday in the Prototype 2 class, but it only took two contestants to make for a great race. William Niemeyer Jr., driving the No. 65 Superior Equipment Sorcerer car, held the lead for the first seven laps. But Pat Wildfire and his AMAC P2 car chased him down, then grabbed the front spot a little past the halfway point.

“Bill and I always have super races,” Wildfire said. “There’s a couple places on the track where I’m just a little bit faster than him, and I can make up some speed. I just had to pick the right corner, then I got by him.”

Niemeyer, however, never lost sight of Wildfire. The two were side by side and separated by 0.021sec when the penultimate lap began. But Wildfire soon fell back, having run out of gas, and Niemeyer grabbed victory.

“I thought I had a good lead,” Niemeyer said. “Then, I was surprised when Pat caught back up to me later, and he went right past me. I was driving as fast as I could. Finally, I caught him at the end of the backstraight, went inside of him, and kind of did a slide job on him. We had one heck of a race.”

Getting Back on Track: In Formula Enterprises 2 (FE2), class polesitter Bailey Monette and his No. 5 OPTECH SCCA Enterprises FE2 Mazda held the lead the entire way, but only finished 0.725sec over the car of Jason Conzo. Still, the last time Monette was on track was a few weeks ago at VIRginia International Raceway for that Hoosier Super Tour stop, and he finished 19th both days. So, his performance Saturday at PittRace was a welcomed change.

“This race was very reassuring,“ Monette said of the win. “We have had a lot of misfortune this year with rambunctiousness, being too aggressive in the race, and being caught up in stuff.”

“VIR was rough,” he continued. “We came out to PittRace to qualify for the Runoffs. And we wanted to have a bounce-back weekend. We’ve faced misfortune, but you can always come back. I can’t tell you how happy I am for the team.”

Gremlins Impact GT-1 and GT-2: David Pintaric put his Ford Mustang on pole in the GT-1 class, then shot out to what looked to be a commanding lead during the first three laps. But his car then experienced difficulties. That significantly hampered his lap times, and allowed Matthew Butson to catch up and get by in the No. 24 Butson Racing/GoodGuy Inc Chevrolet Corvette. Butson then led the rest of the way and took the win.

“He got out to a good jump at the beginning of the race,” Butson said about Pintaric, who still managed a runner-up finish. “Unfortunately for him, he lost third gear. That gave us a chance to catch up and take the lead.”

An uncommon occurrence then arose in GT-2 as Andrew Aquilante, who usually jumps out to a lead and runs off to victory, fell into second place at the start of the race. Instead, it was Kevin Allen and his Nissan 300ZX that was out front.

Allen led the first eight laps. Aquilante, driving the No. 33 Phoenix Performance Chevrolet Corvette, closed in on Allen at times, then fell back a bit. But on lap nine, Allen gave up the lead and pulled down pitlane a lap later, taking himself out of contention.

“It’s fun and easier to be the hunter sometimes,” joked Aquilante. “Kevin got the jump … and I set off behind him. I saw he was slipping, but I was sliding. We found where he was weak, and pounced on it. We got away, then it looked like he had an issue.”

A Lap of Honor: Earlier in April, seven-time National Championship Runoffs winner Scott Rettich passed away at 37 years old. The longtime racer, who first joined Sports Car Club of America in 2005, was instrumental in the foundation of Alliance Autosport. He was also a staunch supporter of the Spec Racer Ford and Formula Enterprises communities

On Saturday, the Spec Racer Ford Gen3 field did an extra pace lap in memory of Rettich. Around the course, SCCA volunteers waived flags as the field passed by in remembrance of a talented driver and valued member of the SCCA family.

When the race began, polesitter James Goughary immediately found the front spot in the No. 68 car, then stormed off to a victory of 15 seconds over Todd Vanacore.

“I drove for Scott’s team here in 2015 when I first got back into Spec Racer. That was when the Spec Racer Ford Gen3 cars came out,” Goughary recalled. “It’s good to get this win for him.”

Sunday’s Schedule: There’s more to come Sunday from PittRace during a second day of Hoosier Super Tour competition that starts at 9 a.m. Eastern Time. Each of the seven race groups will have 35-minute or 17-lap contests to decide more winners. Follow the excitement live online at SCCA.com for enhanced timing and scoring, the Super Tour Radio presented by Hoosier Racing Tire broadcast supplied by Performance Motorsports Network, and multiple trackside video feeds.