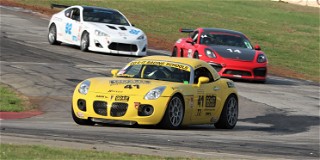 Sunday, the second day of Hoosier Racing Tire SCCA Super Tour activity at Hallett Motor Racing Circuit (HMRC), commenced with 15-minute qualifying sessions for each of seven race groups. That gave drivers a chance to improve their performance, and grid spots, before a second set of 35-minute or 27-lap contests unveiled another collection of winners who triumphed around the 1.8-mile, 10-turn circuit.

The April 23-24, 2022, event hosted by Ark Valley Race Group saw Sunday qualifying conducted in drying conditions after morning showers passed through the area. When racing began after 10:30 a.m., conditions were mostly cloudy, and the winds had died down from the previous day.

Second to First: A few drivers who just missed the podium’s top step Saturday found redemption Sunday by securing hard-fought victories. For instance, Formula Enterprises 2 driver Whitney Strickland found himself on the top step of the podium Sunday after settling for the runner-up spot Saturday. Strickland, driving the No. 08 Bitcoin FE2 Mazda, led the entire race Sunday. But a little past the halfway point, Saturday’s FE2 winner Charles Russell Turner closed in. With a couple laps remaining, Turner tried to make a pass on Strickland. He got a little deep in to turn 10, lazily spun the car, and Strickland hustled off to victory.

“I was trying to shake him,” Strickland said about Turner. “I was glad to get the win at the end. Sometimes you’ve just got to hold out until someone else makes a mistake.”

Stephen Johnson was working hard Sunday in Super Touring Lite to claim duplicate victories over the weekend. Jake Anton, in the No. 59 Steve Johnson’s Thongs for Men Mazda Miata, was chasing him hard after finishing second Saturday. The gap Sunday was only 0.300sec between the two drivers, and Anton looked to have a job ahead if he was going to win. But on lap 15, Johnson’s car slowed, and he pulled down pitlane and into the paddock. That handed the lead to Anton, who went on to victory.

Formula 500 (F5) driver David Vincent also managed to turn things around Sunday. It was Timothy Friest who won Saturday’s F5 race, and he stormed out to a lead on Sunday. But Vincent came back and took the lead just past the race’s halfway point. Both drivers were in KBS mk VII sleds, and the battle was as tight as could be. At the checkered flag, Vincent had a 0.110sec advantage on Friest.

“It was a very close finish, and it was a lot of fun,” Vincent admitted. “Maybe we had 10 car lengths between us at any time. I got lucky and got by him, and then had to defend the rest of the way just going as hard as I could.”

Four for Four: Several drivers managed to claim two victories in a single class over the weekend. But only one competitor walked away with four first-place trophies when all was said and done. That competitor was Michael Pettiford, who brought his cars from Colorado, and was the only driver from Colorado to win races during the Hoosier Super Tour at HMRC.

“I’m always glad to start my season four for four. I’m just delighted,” said Pettiford, who has been racing with SCCA for more than 30 years.

New Track Records: Some new track records were set at HMRC Saturday and Sunday in certain classes. On Saturday, Billy Smith and his No. 111 VacayMyWay Formula Mazda turned a 1:13.623 that reset the Formula X record. Also on Saturday, the Touring 4 track record was reset to 1:26.412 by Sergio Zlobin driving the No. 18 Hoosier/RPM Motorsports Mazda MX-5.

Jack Donnellan cemented a new track record on Sunday for Prototype 2 (P2). He was the only P2 contestant at the event, thusly earning two first-place trophies. But icing on the cake was a P2 course record of 1:16.078 in the No. 9 Quantum Racing Services/Elite Engines/Mazda Lola B07/90 car. Hans Peter also maneuvered his new No. 66 Phenix Porsche GT3 Cup car to a lap of 1:16.214, resetting the GT-2 lap record around HMRC. And lastly, a third record fell Sunday in GT-X when William Coffey turned a lap of 1:18.691 in the No. 97 TrafficGrafix/ P2R Racing/Norwood Auto Italia Maserati MC GT4 car.

Post-Race Winner Interview Videos: To hear exactly what Hoosier Super Tour winners had to say from HMRC, check out the SCCA Road Racing Facebook page. It’s there where you’ll find some one-on-one interviews from Saturday, as well as victory podium celebrations and interviews from Sunday’s contests.

Pointing Towards Pennsylvania: With competition completed at HMRC, the Hoosier Super Tour now packs up and quickly heads to Pittsburgh International Race Complex (PittRace) for next weekend’s three-day event taking place April 29-May 1 in Wampum, PA. The seventh of 10 stops on Hoosier Super Tour’s 2022 schedule, PittRace’s challenging 2.78-mile, 19-turn circuit will be in play. Driver and worker registration is open for that event.

Photo: Michael Pettiford on his way to victory in Touring 3, one of four wins at Hallett Motor Racing Circuit during the Hoosier Racing Tire SCCA Super Tour.