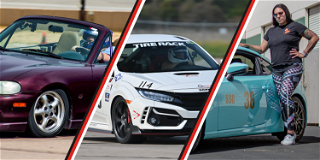 For the ninth consecutive year, the Wendi Allen Scholarship Fund has awarded funding to encourage women from SCCA’s Solo community to become more successful drivers and contributing members of the Sports Car Club of America (SCCA). Named and established by the family of Wendi Allen, the scholarship honors the multi-time Solo National Champion who loved and supported SCCA’s autocross community.

A selection committee consisting of championship-caliber women autocrossers selected this year’s award winners from a host of submissions.

Kirk watched her husband autocross for four years before finally getting behind the wheel, where she was immediately hooked. A staple at Southern California events after acquiring a Toyota FR-S in February 2021, she has plans for her rookie appearance at the Solo National Championships this season. The scholarship will certainly offset the travel costs from the West Coast for Kirk.

Lindemann got her autocross start in 2019 after an introduction to the sport from a neighbor. She jumped into the Regional program with full force, and quickly found her way to the Solo National Championships for the first time in 2021 in a Honda Civic Type R, where a pesky cone on the final run kept her from the podium. She plans to use this scholarship opportunity to “push herself to the next level” as a driver.

Tattershall has already begun promoting SCCA autocross to other female drivers after three years behind the wheel herself. Serving as the chief of workers for both the Colorado Region and Continental Divide Region’s programs, she’s made a commitment to herself to take a step forward as a driver during the 2022 season in a Mazda Miata.

For the fifth consecutive year, Mazda Motorsports has provided funding for one of the annual scholarships in memory of Wendi Allen to a competitor who plans to compete in a Mazda this season. That award was Tattershall’s for 2022.

The other two scholarships awarded for 2022 are funded by the SCCA Foundation. Jeff Jacobs, Chairman of the SCCA Foundation, was introduced to National Solo competition by Mark and Wendi Allen and continues to work in Wendi’s memory.

"Wendi Allen not only pushed herself to compete at a high level, she gave generously of her time and business skills to the Club and her Region," Jacobs said. "This year's three awardees exemplify the spirit of competition and leadership that Wendi brought to the SCCA.

"This scholarship program is an important part of our stewardship of the Club for future generations. The number of nominees and the extraordinary stories for each of them may have made the selection process especially tough for the committee, but it is a testament to the growing success of the intentional, welcoming environment we are creating for women competitors, leaders and members."

“This year, the committee received 45 nominations or applications from across the country,” said Tara Johns, Chair of the Wendi Allen Scholarship Fund Committee. “The Women on Track committee is very encouraged to see so many women who have the desire to become more successful drivers, while also contributing to the Club.

“Choosing the best recipients is a challenging task for the committee, and often times the level of contribution to their Region is what makes a difference when choosing between so many quality candidates. If you applied yourself or nominated someone this year who did not get selected, the committee encourages you to submit the nomination again next year.

“We would like to congratulate this year’s recipients, and we look forward to seeing how each one of you take full advantage of what the Wendi Allen Scholarship offers. Our hope is to continue to honor Wendi Allen and the love she had for the SCCA Solo Community.”

The SCCA Foundation is accepting donations earmarked for the Wendi Allen Scholarship Fund and for its other initiatives advancing opportunities for women's involvement in the Club. SCCA members can go to their My SCCA membership portal to make a donation.