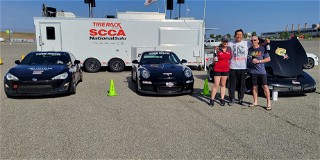 This year’s Tire Rack SCCA ProSolo Series continued its cross-country competition season with a West Coast event at Auto Club Speedway in Fontana, CA. The schedule followed the traditional ProSolo format, with class runs on Saturday and Sunday serving as its own competition as well as the qualifier for Sunday afternoon’s Challenges.

The weather got increasingly comfortable as the weekend progressed, with 72 degrees F the high temperature on Sunday for the final day of competition. That was a significant drop from 88 degrees on Saturday – itself a refreshing 10 degrees cooler than Friday afternoon’s course walks.

Matt Jones laid it down on Sunday morning, extended his lead to more than 0.7sec and securing the top spot in the STR class in his Mazda MX-5 to take back-to-back class wins. Scott Mullens finished second and Joe Goeke took third in the class.

In CAM, Chad Ryker took a commanding lead on Saturday morning in his 1968 Chevrolet Camaro, which was enough to keep the win through Sunday. Jeff Wong and James Darden completed the podium in more modern Camaro technology.

Kevin Dietz took home the win in Solo Spec Coupe with Paul Brown only 0.039sec behind. Dietz and Brown ran both scoring laps on the same tenth of a second, but Dietz was a whisker ahead both times.

In a massive 20 car Bump class stacked with numerous fast drivers, Adrian Cardenas led the charge going into Sunday’s runs, but watched as Manfred Reysser stepped up by more than a second to move into the top spot, with Dennis Hubbard third.

Bonus Challenge: Brian Coulson’s CAM machine took the top spot from Paul Durr in the always-exciting Corvette vs. Kart Modified matchup. For the effort, Coulson earned a free entry to a future ProSolo.

Ladies Challenge: Kate Fisher got a little payback to codriver Annie Gill in the semi-final and moved on to face Lisa Berry in the final round. Fisher came home with the win in a Scion FR-S, narrowly topping Berry’s Porsche Cayman GTS.

Super Challenge: To win a Super Challenge, you don’t need to qualify first to win it all. Just ask James Yom, who blasted through the ladder starting with Sean Velandia. He then marched past Matt Jones, Monty Pack and Jason Bucki to make the finals against Scott Phillips. Yom put Phillips in a hole on the first run, and Phillips DNF’d the final to give Yom the win.