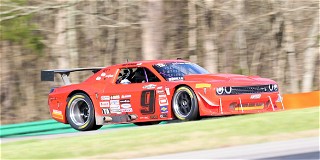 VIRginia International Raceway (VIR) was the fifth stop on the 2022 Hoosier Racing Tire SCCA Super Tour schedule. With around 400 entries, the April 8-10, 2022, event will likely be one of the largest Hoosier Super Tour gatherings of the season. That can be attributed to the fact that VIR is where the 59th SCCA National Championship Runoffs will be held later this year, so many drivers used this past weekend as an opportunity to get better acquainted with the quick, winding and exciting 3.27-mile circuit.

Sunday saw mostly sunny skies in the morning before it became completely sunny in the afternoon with a slight breeze and temperatures hovering in the low 60-degree F range. Pretty good conditions as drivers across all eight race groups went out for 14-lap or 35-minute contests.

The Steyn Way: At 64 years old, Danny Steyn could be in his prime as far as auto racing is concerned. The reigning Super Touring Light (STL) National Champion swept STL with wins Saturday and Sunday at VIR. But Sunday’s race got a bit hairy.

Driving the No. 19 Ocean Machinery/Nelson Engines/OPM Autosports/G-LOC Brakes/Hoosier Mazda MX-5, Steyn was in control out front for the first half of the race with Olivier Jean Francois, in a Toyota 86, not too far off his bumper. But about five laps into the race, Steyn was launched into the air a bit when he made contact with a B-Spec car. Francois was able to shoot by for the lead, but Steyn got the position back before a full-course yellow came out.

After the delay, the race went green again for a two-lap shootout. Steyn, however, wasn’t playing around and stormed away for the victory. Then two race groups later, Steyn was back on the top step of the victory podium after winning Sunday’s Spec Miata (SM) race in the No. 39 Adept Studios/Rossini Engines/OPM Autosports/G-LOC Brakes Mazda Miata. However, he triumphed in SM by only 0.099sec over Charles Mactutus.

“This is a shoutout to all the grandads. Here I am, standing on top of the podium, kicking the kids’ asses,” Steyn joked while holding his winner’s trophy. “Trying to stay relevant at this age is difficult. It takes a lot of hard work and commitment. But I’ve got such respect for the young kids because they are so ‘on it’ and they are making me work harder and harder.”

Speaking of three wins on the weekend, Charles Russell Turner accomplished that, too. He swept wins in Spec Racer Ford Gen3 in the No. 23 PCS SRF3 car, and grabbed one more victory Sunday in Formula Enterprises 2 driving the No. 32 Southeast Spec Racer/PCS racecar.

Close Call in GT-Lite: Graham Fuller, driving the No. 2 Hoosier/Hub City Performance/Ostar Motorsports Honda CRX, grabbed the lead early in the GT-Lite (GTL) race. Charles Leonard, however, stayed pretty close on his rear in a Nissan 200SX. On lap seven, Leonard’s persistence paid off as he caught Fuller in turn one.

Leonard slipped his red car into the lead coming out of turn two, then gave Fuller a different type of challenge on the exit of turn three.

“We were side by side coming out of turn one and turn two,” Fuller said. “But I put Charlie in a little bit of a bad position, you know, because that’s my job. He came around the corner, clipped the apex in turn three, and his car came right around and spun in front of me.”

Expertly avoiding the spinning car in front of him, Fuller made it to the checkered flag unchallenged from there to take the GTL win. Leonard was able to gather up his car after the spin and still finished in the runner-up spot, albeit a full 25 seconds behind Fuller.

GT-3 Challenge Round Two: The second round of the 2022 GT-3 Challenge presented by MPI championship was part of the Hoosier Super Tour weekend at VIR. Supported by Mazda, Max Papis Innovations, Hoosier Racing Tire, Goodyear Tire and AiM Sports; the initiative continues to bolster participation in the GT-3 class.

The GT-3 winner Saturday was Tony Ave in the No.44 Acura RSX. While he won the race, Ave noted that fellow GT-3 driver Jeff Dernehl was pretty fast, too, and probably had something left to show for Sunday’s race.

Dernehl, the 2019 Runoffs winner at VIR and inaugural GT-3 Challenge presented by MPI champion, indeed had a little something more in his Mazda RX-7 and led the first eight laps of Sunday’s race before Ave got by and went on to victory. So that’s a GT-3 sweep for Ave at VIR, which puts him in a fantastic position as far as the GT-3 Challenge standings.

Next on this year’s GT-3 Challenge presented by MPI schedule is the May 14-15 Hoosier Super Tour at Portland International Raceway in Oregon. Mid-Ohio Sports Car Course is then the venue June 11-12 for GT-3 Challenge’s fourth round before an eventual 2022 champion is found after SCCA National Championship Runoffs racing concludes at VIR.

Fun with GT-1: The GT-1 class is a fan favorite at every Hoosier Super Tour stop. Seeing and hearing those beefy, thundering cars haul down VIR’s long front stretch is a remarkable sight. On Sunday it was Adam Romito, who won Saturday’s GT-1 race, on the pole in his stunning No. 42 ZETA Performance/Davis Machine Works/Competition Gear/SRI Dodge Challenger. He led the opening lap, but then it was David Pintaric’s turn to shine in his GT-1 Ford Mustang as he assumed the lead until the race saw a full-course yellow on lap six.

At the restart, Pintaric again showed strength and remained up front. Behind him, Romito was dealing with a charging Jeff Hinkle in the No. 9  NetDepot.com/TRGDataCenters.com Dodge Challenger. He held off that charge and focused again on challenging Pintaric for the lead. But when the cars came around to begin lap 10, Hinkle was up front all by his lonesome, and eventually went on to victory.

“Adam and David are extremely great competitors,” Hinkle said atop the victory podium. “Our strategy was to be right there in case they made any mistakes or had any issues, and that strategy paid off for us and we capitalized on it. They were both racing hard and maybe got together a little bit, and I was able to avoid David when he spun out. Then I was going to take Adam on … but he fell off the pace with a cut tire.”

Post-Race Winner Interview Videos: Want to hear exactly what VIR Hoosier Super Tour winners had to say after the race? Then check out the SCCA Road Racing Facebook page. There you’ll find some one-on-one interviews from Saturday, as well as victory podium celebrations and interviews from Sunday’s event.

Hallett Next on Hoosier Super Tour Schedule: Jennings, OK, and Hallett Motor Racing Circuit is next on the Hoosier Super Tour schedule. The April 23-24, 2022, event will be the sixth of 10 Hoosier Super Tour weekends on this year’s calendar. Driver and worker registration is open for that event, so plan now to be part of the action at that 1.8-mile, 10-turn circuit found in the rolling Osage Hills of Oklahoma.

Photo: Jeff Hinkle thundering his way to victory in GT-1 at the VIR Hoosier Super Tour