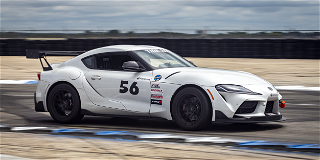 Conditions over the weekend were predictably “Florida” for early April. It was a little hot and muggy Friday and Saturday. With the exception of a light smattering of rain in the afternoons, really wet weather stayed away. Sunday, meanwhile, saw perfect conditions, with temperatures hovering around 80 degrees F for drivers who availed themselves of this very special opportunity to careen around Sebring.

Also taking advantage of the opportunity were many Track Night in America Driven by Tire Rack participants and Track Event enthusiasts who experienced a ton of time on track over three days. In all, many in attendance voiced their sincere belief that the event was absolutely spectacular.

The fastest lap of the weekend went to Unlimited 1 (U1) driver JG Pasterjak, who also happens to be production manager and art director for Grassroots Motorsports and Classic Motorsports magazines. Pasterjak’s lap of 2:16.106 set on Sunday in a 2004 Chevrolet Corvette was a scorcher, and helped him secure the top spot in U1, as well as the overall victory.

The closest contest on the weekend belonged to Max 2 (M2), where Danny Kao and his 2021 Toyota Supra managed a 3.972sec win over the 2004 Mazda RX-8 wheeled by Perry Ellwood. Both drivers performed so well that they took second and third overall, respectively.

Nearly as close was the Tuner 5 (T5) battle. There it was Chris Hauenstein who claimed victory by 4.532sec over Cameron Barie, with both drivers in 1999 Mazda Miatas. On Sunday, the difference in best lap times around Sebring’s full circuit was less than half a second between Hauenstein and Barie.

Compared to M2 and T5, the Sport 2 match was a blowout – sarcastically speaking. With a whopping 5.874sec to spare, Douglas Wille and his 2022 Chevrolet Camaro came home victorious over a 2004 Chevrolet Corvette driven by Bryce Merideth. The difference in Sunday’s best laps around Sebring was less than 0.700sec between the two drivers.

From Saturday evening’s Hagerty Social Dinner to Sunday’s KONI Podium Celebration, there were festivities aplenty at Sebring. And as always, a handful of superlative awards were presented, such as the Spirit of Time Trials that went to Jerome Cahuzac. Originally planning to codrive at Sebring, unfortunate circumstances accidently left Cahuzac without a TTNT ride. But instead of bailing on the event, Cahuzac came down from Chicago and worked grid and tech throughout the weekend to help make the event a success.

Scott Leslie took Top Novice after winning the Sport 3 class driving a 2002 Porsche 911, and Caleb Rosario was recognized as the Breakthrough Performance recipient. Rosario competed at Sebring in the Max 1 class driving a 2015 BMW M4. He’s just starting to explore Time Trials after competing in other motorsports endeavors, including drag racing.

And finally, the Most Improved award went to Alan Nothstein, who cut more than six seconds off his lap time from Saturday to Sunday driving a 2016 Chevrolet Corvette.

Tire Rack SCCA Time Trials National Tour Powered by Hagerty now heads to Texas for the April 23-24 weekend at Eagles Canyon Raceway. Located in Decatur, TX (about a 45-minute drive northwest of Fort Worth) the exciting 2.7-mile, 15-turn circuit includes a half-mile backstraight and 200 feet of elevation change, both of which are sure to provide plenty of excitement.

Online registration for TTNT’s stop at Eagles Canyon Raceway is currently open. Click the link below today to reserve your spot and join the fun.