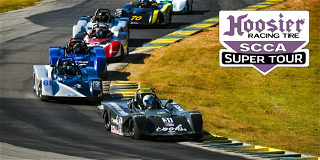 The April 8-10, 2022, Hoosier Racing Tire SCCA Super Tour at VIRginia International Raceway (VIR) is the series’ fifth event of the year. That means when the weekend is complete, the 2022 Hoosier Super Tour will have reached the halfway point of its 10-event schedule, and a chunk of Hoosier Super Tour Nationwide Points will have been collected. However, there’s still lots left on the table for Hoosier Super Tour competitors in April, May and June.

Located along the border of North Carolina and southern Virginia, VIR opened in 1957 as one of the country’s first permanent road racing circuits. Recognizing greatness, the 3.27-mile track has largely remained the same over the years, with the only change being strategic track widening in certain places for safer runoff room.

VIR’s first official event was an SCCA race that attracted stars like Carroll Shelby, Carl Haas, Bob Holbert and Augie Pabst. The track is a fixture in SCCA racing, hosting its first SCCA National Championship Runoffs in 2019, and is a favorite amongst racers due to its high-speed straights, challenging turns and dramatic elevation changes.

Hoosier Super Tour on-track action begins at 8:30 a.m. EDT on Friday, April 8, with 20-minute practice sessions for each of the eight run groups. After lunch, each group returns to the track for 20-minute qualifying sessions.

Saturday morning, April 9, opens with a round of 15-minute qualifying sessions for each group, followed by 25-minute races beginning after lunch. Sunday, April 10, is all about racing, as cars roll onto the circuit beginning at 8:30 a.m. EDT for 14-lap or 35-minute sprint races, whichever comes first.

Who’s at VIR for the Hoosier Super Tour?

For those who somehow haven’t heard, VIR hosts its second-ever SCCA National Championships Runoffs from Sept. 24-Oct. 2, 2022, and the exact track layout used during this Hoosier Super Tour at VIR will be in play for the 2022 Runoffs. Thus, it should come as no surprise that this Hoosier Super Tour is nearing 390 entries. It’s a chance to tune cars, devise strategies and gain experience prior to the winner-take-all Runoffs.

Across all eight racing groups, every pack is stacked with proven Hoosier Super Tour winners and former Runoffs champions. In what will likely be the largest field of the weekend with more than 60 entries, Spec Miata is shaping up to be one of the most anticipated races of the weekend. Spec Racer Ford Gen3 will likely be equally enthralling with around 50 entries. One of those SRF3 entrants is defending National Champion Bobby Sak, and another is Robeson Clay Russell, who won SRF3 at the 2019 Runoffs at VIR.

And let’s not forget the open-wheel classes, with the largest at VIR being Formula Enterprises 2 with two dozen entries. Whitney Strickland, the current FE2 Hoosier Super Tour Nationwide Points leader, will be one to watch in that race group.

The 2022 GT-3 Challenge presented by MPI championship continues during the Hoosier Super Tour weekend at VIR. Supported by Mazda, Max Papis Innovations, Hoosier Racing Tire, Goodyear Tire and AiM Sports; the GT-3 Challenge is in its fourth year and continues to bolster participation in the GT-3 class.

The Hoosier Super Tour at VIR is open to the public. Spectators can watch all of the action trackside on Friday, Saturday and Sunday with a $25 three-day pass. Two-day passes are available for only $15, with single-day admission running $10 for Saturday or Sunday. Children 16-years old and younger are admitted for free with a paying adult, and there is no cost for spectator parking. Additionally, all current military are admitted free to the event, and veterans receive a 50% discount on entry.

If you can’t be at VIR in person, follow the action live online at SCCA.com, where you’ll find the Super Tour Radio presented by Hoosier Racing Tire broadcast supplied by the Performance Motorsports Network team. SCCA.com also features enhanced timing and scoring, as well as video feeds.

More information about the 2022 Hoosier Racing Tire SCCA Super Tour from VIRginia International Raceway can be found on the event page.